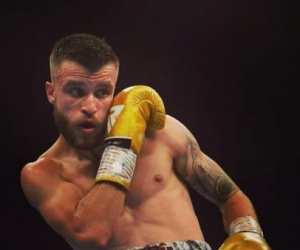 Tommy Frank: I’ve been training to put on a good performance and the plan is the same

In the prime of his career, 27-year-old Tommy Frank (13-0, 3KOs), like most UK fighters, has had to endure a year of inactivity, whilst also dealing with a number of disappointments.

‘Super’ Tommy was due to fight for the International Boxing Organisation (IBO) World Title in March, but that dream was dashed by the ensuing pandemic. The subsequent lockdown meant that Tommy has had to be content with staying in the gym, honing his skills, and waiting for a glimmer of hope.

Kash Ali on Tomas Salek clash: "Whoever lands first will get the KO and I can promise you it’ll be me"

Light at the end of the tunnel arrived with the announcement of the UK’s first ever drive-in boxing show, scheduled for November, to be topped by himself versus fellow Sheffield fighter, Kyle Yousaf, for the British Flyweight Title. Despite the second national lockdown meaning the original November date was then bumped to December 11 – Tommy kept his focus.

Now, the ‘Steel City’ fighter is dealing with more change after Yousaf was withdrawn from the show after testing positive for Covid-19. In his place steps highly-rated southpaw, Harvey Horn, with the duo now dancing for the International Boxing Federation (IBF) European Flyweight crown.

Horn is hailed by plenty of boxing insiders as one of the UK’s brightest young prospects. A former ABA champion, and Team GB member, Horn had a stellar amateur career – and has kept up the momentum in the pros. Racing to 8-0 (2) in just over two years, the 25-year-old Londoner picked up the World Boxing Organisation (WBO) European Flyweight belt in November, and will be confident of upsetting the home corner in Sheffield in just a couple of weeks time.

Despite the upheaval, hard-working undefeated Frank, 13-0 (3), remains the ultimate professional. Early morning runs are ticked off daily, scheduled sparring sessions are banked, and diet is adhered to. Grateful that he is just able to ‘get out’ this year, Tommy has total confidence in his ability and is totally philosophical and undaunted at the latest change.

“Firstly, I want to wish Kyle a speedy recovery, and I’ve been assured that me and Kyle will still be fighting for the British Title, when he’s ready for it. That British Title is going nowhere, and I definitely want that early next year.

“I’m very grateful to Dennis [Hobson] and Steve [Crump] for getting a new opponent, and I also want to thank Harvey Horn for stepping in. I’m definitely not overlooking him; he’s a very good fighter. It’s still a really good belt, and will get me in the IBF rankings, so hopefully that will see out 2020 for me. I’m staying positive and optimistic, and making the very best out of this situation I’ve got.

“On paper, I would probably get more credit for beating Harvey. I’m not overlooking him but I’ve been training to put on a good performance and the plan is the same, to turn some heads. The opponent doesn’t matter to me, and that’s not over confidence, but I just concentrate on being the best I can be. I’ll adjust to what’s in front of me, and find a way to win.

“I’ve not seen too much of Harvey, just a couple of his fights. He’s a very tricky southpaw, and likes to box. Credit to him for taking this because it’s not an easy fight for him either. I’ll have to be the best I can be to beat him, I’ll have to put in a good performance to get this win.

“It’s not going to be an easy fight, but it’s one I’m very confident of winning. I just want to get in that ring on December 11, and fight!”

Shakan Pitters dismisses Craig Richards: "Spider’s not a force in this division"