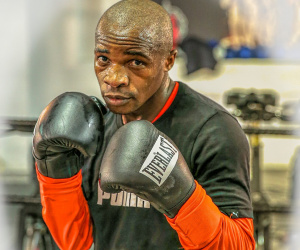 Who is Moruti Mthalane? Facts you need to know about Sunny Edward’s future foe below

BBN found out some little-known facts about the decorated South African world champion:

Moruti was born on October 6, 1982, in Gauteng, the smallest province in South Africa, but the most populous with a population of over 15 million people. The main sport of the region is football, although more commonly referred to as soccer, and many of the local teams play in the top flight, such as Kaizer Chiefs and Orlando Pirates. Rugby is also very popular, as well as cricket.

The youthful-looking 38-year-old is known as ‘Babyface’.

Trained by 2009 South African Trainer of the Year Nick Durandt, Moruti won his pro debut in December 2012 in the third round against countryman Wiseman Mnguni. He weighed in at 103lbs (minimumweight), which is only just over seven stone!

The South African fought every fight at home until his 25th pro contest, which was a huge step up against Nonito Donaire at the Mandalay Bay Hotel, Las Vegas, in November 2008. The IBF mandatory was stopped by the ‘Filipino Flash’ in the sixth round. One judge had him just one round down on the scorecards.

Since then, he has won every bout abroad in Italy; Panama; Kuala Lumpur; Macao; and Japan.

The three-time world champion has been trained by Colin Nathan since 2015 at the Hot Box Gym in Johannesburg, first opened in 2000. Recently, the gym partnered with MTK Global to become MTK Africa Gym.

Nathan is the head of No Doubt Management and has also trained Isaac Chilemba, who now trins with Roy Jones Jr in the US.

Mthalane met Sunny Edwards once before and says of his forthcoming opponent, “I know Sunny Edwards very well, I met him in 2018, he’s my good friend. He’s a little bit awkward; he moves, he switches, he’s a really good boxer.”

Mthalane is an experienced boxer-puncher.

Last December, the champion was due to fight at home for the first time in three years, having had his last four fights overseas, but the show was frustratingly cancelled at the last minute, meaning that the ageing champion has now had 16-months of inactivity.

The Hot Box Gym where he trains is filled with talent, so Mthalane gets to spar with the likes of two-weight world champion Hekkie Budler and IBO World minimumweight champion Simpiwe Konkco, as well as emerging talents such as WBA Pan African titlist Ricardo Malajika and unbeaten Cayden Truter.

His first reverse was in his 15th contest and maiden title fight to South African flyweight champion Nkqubela Gwazela (13-2) for his national title as well as the vacant WBC International belt. ‘The Destroyer’, who ended his career in December 2011 with 15 KOs from 20 victories, pulled out all the stops in round 10 of 12 after being outboxed to pummel the inexperienced challenger and forcing referee Alfred Buqwana to step in.

His only other loss was the notable sixth-round TKO at the hands of four-weight ruler Nonito Donaire in his first fight abroad.

How to watch Moruti Mthalane vs Sunny Edwards