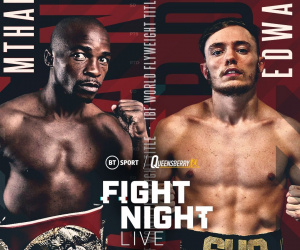 How to watch Moruti Mthalane vs Sunny Edwards

BBN have provided all the details you need to tune in and watch undefeated British champion Sunny Edwards (15-0, 4KOs) go for world glory against reigning world champion Moruti Mthalane (39-2, 26KOs) on the 120th day of the year.

Jonathan Kumuteo reflects on pro debut, comparing it to a video game

The championship clash occurs on Friday, April 30, which is the same day in history that the legendary Bob Fitzsimmons KOd American Ed Dunkhost in two rounds in Brooklyn in 1900.

It takes place behind closed doors at the iconic 'Home of Boxing', York Hall in Bethnal Green.

UK fight fans can expect the main event fighters to make their ringwalks any time around 10pm (GMT), but boxing events are often subject to delays.

The event will stream live and exclusively on BT Sport 1 - £25 per month subscripton fees.

You can live stream the Queensberry Promotions event online via BT Sport website or BT Sport app - available to download for free on iOS and Android phones and tablets.

BBN will be providing LIVE updates on the night, right HERE

Irish hero Michael Conlan (14-0, 8KOs) Conlan is back after a disappointing 2020 that started with the COVID-related cancellation of his annual St. Patrick’s Day bout in New York and ended with an ankle injury suffered while training in November. He knocked out former world title challenger Sofiane Takoucht last August and now sets his focus on the junior featherweight division. He is ranked No. 1 by the WBO and No. 8 by the WBA, and he could be in line for a world title shot with a victory over Ionut Baluta (14-2, 3 KOs), a Romanian who is used to overcoming long odds. Last March, Baluta stunned former junior featherweight world champion TJ Doheny via eight-round unanimous decision, and six months later, he knocked out Conlan’s 2016 Irish Olympic teammate Davey Oliver Joyce in the third round.

The fight takes place behind closed doors, with no spectators allowed.

Everything you ever need to know about Moruti-Edwards HERE

Sunny Edwards: "Moruti is the most criminally underrated fighter, having not lost in 13 years and he is a proper, proper threat. This is no gimme or easy world title for Sunny - it is very, very far from that.

"I asked for this fight and, if you look back at press conferences or interviews, you can see that I have wanted it for some time. In my head, this is what was coming to me and it is finally here and I have got what I wanted.

"Now it is my chance to prove myself and this will be the best benchmark I could have. I have beaten Olympians and people who have mixed at European and world level, but this is real genuine world level. This is my introduction as I have not been there before.

"He is as legit as they come. A big puncher, 41 fights, 39 wins and 26 knockouts. If I go and do this, capture the world title in my 16th fight, nobody can really argue. This will qualify everything I have been saying - if I do it. Moruti is no pushover by any stretch of the imagination; he is a very, very, very good fighter."

Unbeaten Sunny Edwards will go into battle for the IBF world flyweight title against the formidable and decorated champion Moruti Mthalane on Friday April 30, live on BT Sport.

For 'Showtime' Sunny, 25, it will represent a first crack at world honours in his 16th fight as a professional, with the British super flyweight champion having won belts at both fly and super fly, including the IBF International and Intercontinental, along with the WBO International and European. Since beating Ryan Farrag in October 2018, Edwards embarked on a run of six fights with titles on the line to cement his place in the world rankings.

'Babyface' Mthalane first won the IBF World flyweight title on his second attempt way back in November 2009, which he held for over four years with four successful defences. He was stripped of the title, so he never lost his world champion status in the ring. Inbetween his two IBF reigns, he was an IBO World flyweight champion from 2014-2017.

It was when he won the IBF International fly belt in 2017, which propelled him back into an IBF World title fight in his next contest, where he defeated Pakistan's unbeaten Muhammad Waseem on points. He has since defended the belt three times - twice via TKO and once via UD.  He has now defeated 13 opponents in world title fights.

Tim Rickson, BBN Editor: “The champion has serious power and a wealth of experience, but there's a confidence about Sunny that just can't be ignored. Anyone who knows Sunny, has sparred him, watched him spar, trained with him... all back him 100 per cent to become a world champion. He is slick, stylish and clever, so I'm with them - Edwards on points.”

Tyson Fury vs Anthony Joshua changes to a one-fight deal