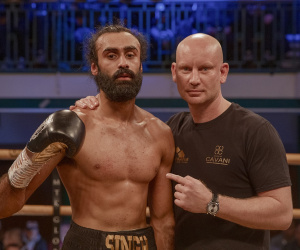 Both unbeaten, both been inactive since lockdown, both from Essex... resulting in a classic local rivalry where the winner takes all!

Unbeaten fighters will collide when Inder Bassi (2-0) faces Jack Martin (3-0) on the huge show at Production Park Studios in Wakefield next week, live in the US on ESPN+ in association with Top Rank, and worldwide on IFL TV.

Bassi, who signed with MTK Global last year, is champing at the bit to get back inside the ring, and the 23-year-old is convinced that he'll be able to produce a dominant display.

"Over the past year it’s been difficult as a young fighter with all the cancellations of shows across the world. I was meant to fight in April and June but both got cancelled due to COVID-19, but luckily I have a good team and they've got me a fight here.

"I’m used to boxing in all sorts of venues as an amateur so fighting behind closed doors isn’t a big deal for me. I’ve still got to go in the ring and do my job."