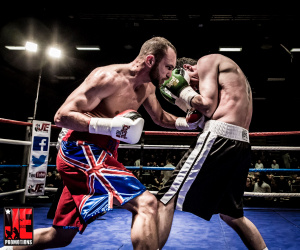 Margate’s Paul ‘Bomber’ Brown (5-0) is busy preparing for his sixth professional contest on May 30 at Mote Park in Maidstone on a Boxing Connected event.

The unbeaten light-heavyweight is in full swing in training as he aims to step up from four to six rounds for the first time in his two-year-long professional boxing career. Not only that, he is also busy matchmaking his own fights, calling out fellow unbeaten fighter Jack Owen (3-0-1) from Bromley.

25-year-old Owen is the target for 30-year-old Brown after watching him box and seeing they have two shared opponents between them – Andy Bishop and Richard Harrison.

Joe’s Jab – The Show Must Go On

Welterweight Lenny Fuller willing to take risks in next fight

Brown declared, “I’m a very humble fighter, very dedicated and I work my arse off. I’ve had five professional fights now and I want to push on for titles as I’m not getting any younger.

“I’ve spoken to my team and manager and there is a fighter out there called Jack Owen, who is also unbeaten, like myself, but I seriously think I can beat him.

“I know some of his team, who are good blokes, so let’s sit down and make this fight happen either in a six-round or eight-round fight. I want the fight so it’s down to Jack and his team now. I look forward to hearing from them.”

In Brown’s last fight on February 29 at Mote Park, after a 16-month bout of inactivity caused by injury (perforated ear drum), he defeated Andy Bishop (0-13) 40-36 on points, making it his fifth shutout points win, having never lost a single round yet.

However, the fight almost ended in disaster as a head clash in the first few seconds saw Brown pulled to the side with a huge cut above his right eye, which required an extended inspection from the ringside doctor, who eventually allowed the contest to continue.

“I was so gutted,” Brown reflected. “I thought that all this hard work and months of training was all going to be for nothing, especially as it was my first fight with my new team, but my corner worked their magic and I was allowed to continue.

“I went down for a right hook and we clashed heads so quickly, I had to have nine stitches afterwards but there was no bruising at all. It means I won’t be able to spar until the last few weeks of camp, but that’s ideal for me because I can concentrate on getting my fitness up for the longer rounds and then end the camp with sparring.”

Rochdale’s Bishop, a 37-year-old southpaw, took to the ring the very next weekend to tackle Owen at the York Hall in Bethnal Green on a Budgen Boxing show. Owen, trained by Jason Hart, took the decision at 40-37 on points.

“I’ve asked my manager, Joe Elfidh, if he can make the fight happen for the next show on May 30, but I don’t mind going on his show at the York Hall,” he continued. “There’s been interest from another boxer’s team to fight me, a really big name in my division, and I believe I’ll beat him, so I don’t mind going to other shows to fight.”

Boxing Connected promoter Elfidh confirmed, “I’m speaking to his manager to try to make the fight for May 30.”

Brown debuted in February 2018 and raced to 3-0 within the space of eight months. However, just one fight during 2019 temporarily stalled his progress, due to the aforementioned ear injury, but now he aims to keep busy and work himself into title contention, wishfully starting with a win over another unbeaten boxer.

“I want to stay active as much as I possibly can,” he vowed. “I’ve been signed off to box now, so I’ll be out again in May and hopefully I’ll fight four times this year and really push on.”