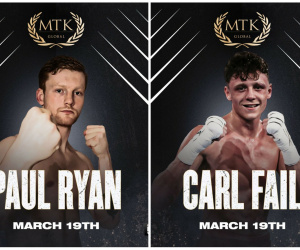 Two extremely talented fighters will be making their professional debuts next month - as Paul Ryan and Carl Fail will both compete on the huge #MTKFightNight event on March 19.

The show takes place at the University of Bolton Stadium, and will be broadcast live in the US on ESPN+ in association with Top Rank, and worldwide on IFL TV.

Irish prospect Paul Ryan only turned over in January this year and enters the paid ranks after a memorable career as an amateur, winning three national titles, a European silver medal, a world bronze medal and much more.

Northampton's Carl Fail turned pro alongside his twin brother Ben in June 2020 and was just as successful during his time as an amateur, becoming a multiple-time National and GB champion and a two-time European silver medallist. He will now look to follow in the footsteps of his sibling Ben, who won his professional debut back in September. The accomplished pair were a part of Team GB for several years.

Ben had 78 amateur fights and is more than ready to enter through the ropes for the first time as a pro after such an extended wait.

MTK Global Promoter Lee Eaton said: "We're thrilled to add Paul Ryan and Carl Fail to our MTK Fight Night card on March 19. Both fighters look destined for huge things in their careers and it's going to be great to see them get things up and running.

"Next month's card is going to be stacked from top to bottom, just like all of our other planned events this year, so we can't wait to get our schedule underway."

Elsewhere on the March 19 card, Lee McGregor challenges Karim Guerfi for his European bantamweight title, while Liam Walsh faces Paul Hyland Jnr for the vacant British lightweight title. More fights for the card will be announced in the coming days.

Jonny Phillips equipped with game-plan for Ibrahim Nadim fight: "I’m going to smash his face in for him"