How to watch Mark Heffron vs Denzel Bentley

Middleweight rivals Heffron and Bentley battle it out for a second time and BBN have got all the details for fght fans to tune in and not miss a single minute of action.

Everything you need to know about Heffron-Bentley 2 below:

The championship contest takes place on November 13, just two months on from their first meeting, which ended in a draw.

The boys are back at the same venue - the BT Sport Studios in Stratford.

The prestigous British middleweight title is on the line. The Lord Lonsdale belt is what every British boxer dreams of winning one day.

UK fight fans can expect ringwalks any time around 10pm (GMT) on Friday night, but boxing events can often subject to delays.

From 7:30pm, Heffron-Bentley will stream live and exclusively on BT Sport 1 HD - £25 per month subscripton fees.

You can live stream the Queensberry Promotions event online via BT Sport website or BT Sport app - available to download for free on iOS and Android phones and tablets.

'TNT' finished his last two foes in the first round, needing just 156 seconds to despatch of them both, so he will be keen to extend his knockout streak. His opponent hasn't yet been named, but the 21-year-old powerhouse has been training with his brother's trainer SugarHill Steward for this fight. He said the Kronk Gym trianer has stripped him back to basics and taught him how to box all over again! It'll be interesting to see the improvements made under such a world-class trainer and to see if Tommy has developed that Kronk Gym mentality of aggression, pure boxing, and knockouts!

The fight takes place behind closed doors, with no spectators allowed.

Denzel Bentley: "I was disappointed because I thought I nicked it and I thought the last round would give me the decision. I thought I did what I needed to do apart from falling asleep in the middle rounds and allowing him to come back into the fight. At the end of the day we are in a better position now and I've got to make this one count."

Mark Heffron: " I've watched the fight 10 or 11 times now and I see the same thing every time. I just feel like I landed the much bigger shots, the more work and the cleaner shots."

Read the Q&A with Heffron and Bentley HERE

Mark Heffron (25-1, 19KOs) is challenging for the British title for the second time. He wasn’t on the same level as his sole conqueror Liam Williams (22-2-1, 17KOs) when they fought for the vacant belt in December 2012. His head was snapped back from the very first round of their British middleweight title fight until he was halted in the 10th.

Denzel Bentley’s (13-0, 11KOs) best win was against Mick Hall (15-3, 2KOs) who he forced to retire in the sixth round last July. This will be his third fight within four months, making him Britain'smost active boxer currently.

The Battersea boxer is a stylish, awkward, ruthless counter-puncher with a frightening 78% KO ratio. His heavy hands are thrown from his hips, which is extremely hard to react to as you can’t see them coming.

It’s an intriguing clash of styles, with Heffron very disciplined and sharp with very decent all-round boxing skills. He’s very orthodox and boxes behind his jab, whereas Bentley couldn’t be any more different. He doesn’t know what he’s going to do himself, which means it’s impossible for his opponents to know either.

Both boxers believe they won the first fight, which means they'll both be super confident coming in to this one, knowing they've got one another's number.

"I got it wrong last time, I predicted a Heffron win but Bentley boxed well and was a lot better than I thought - a draw was about right.

Bentley is the less experienced fighter but would of gained a lot from their last fight and I think he's an improving fighter whereas Mark has probably peaked now, so I'm going for a Bentley win on points."

Read all the predictions HERE

You can keep up with all the action right HERE as BBN are reporting LIVE round by round action. 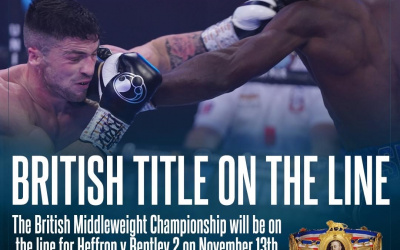