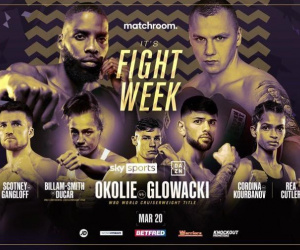 BBN have provided viewers with all the details needed to tune in and watch the first world title fight of the year on these shores between Lawrence 'The Sauce' Okolie (15-0, 12KOs) and Krzysztof 'Glowka' Glowacki (31-2, 19KOs) on the 79th day of the year.

The bout takes place on Saturday, March 20, which is the International Day of Happiness... well, it will be for one cruiserweight at the end of this day.

The vacant WBO World cruiserweight title is on the line, which Glowacki held twice before when he dethroned Marco Huck in August 2015, but conceded to Oleksandr Usyk just over a year later in his second defence. He was elevated from interim to full champion in 2019, so is a two-time WBO titleholder.

It's also shown on DAZN in the US and everywhere except for the UK, Ireland and Australia, and you can sign up here

The event is free to view for Sky Sports and DAZN subscribers.

Liverpool's Fowler is desperate to get a good win over the visiting Spaniard to enable him to challenge European champion Sergio Garcia next.

30-year-old Fortea won his last fight in October via fifth round stoppage, but lost his preceding bout to unbeaten Russian sensation Bakhram Murtazaliev (18-0, 14KOs), who is part of the Oxnard, California training camp with Lomachenko and gang. Two interesting things about that fight was that it was scheduled for 12 rounds for the Eurasian Boxing Parliament super-welterweight title, which is an organisation that probably not many fight fans have ever heard of before, but apparantly the 'EBP' is affiliated with the IBF (International Boxing Federation) and Sergey Kovalev was the first ever champion in 2017.

The other interesting thing to note is that Fortea took the formidable Russian powerhouse, with a 78% KO ratio, the furthest any opponent has ever managed to.

Fowler is looking to make a statement, but he knows that Fortea is tricky and clever, so will have to be at his best if he aims to take out the durable challenger inside the 10-round distance, which only one other man has ever done before and that was over five years ago now.

Fowler is aggressive and has stopped three-quarters of his victims with his power punches, and the former Team GB amateur believes he is entering his prime years under trainer Shane McGuigan. His sheer determination to challenge for the European belt next should result in an exciting showing on the night.

Okolie: “It will be entertaining for fans because there’s going to be someone trying to really put it on me. I believe I’m going to win by stoppage. I’m just excited to watch the highlights of the fight afterwards to see what shot I did it with. This is his opportunity to win what he believes is his Title back. He can be as strong as he likes against whoever he’s boxed so far but there’s no physical chance he’s stronger than me. Although he’s got a lot of attributes, I can’t see any of them working against me. I think he’ll be confident. He’s a game guy and probably thinks it’s my first time at world level. One of my main attributes is my mental toughness. I have the ability to cope with any fight. I look forward to it.

“This has been a long time coming. It’s been a year since I knew that I was mandatory for the World Title. I’ve been mentally preparing for this for a year. We’ve had to deal with lockdowns and now I’m excited to get it over and done with, get the victory and become a World Champion. Physically I’m getting into my prime now. Mentally, I’ve dealt with the excitement of the occasion. Now it’s just a formality.

Krzysztof Glowacki: “This is a privilege for me, I will fight strongly and I’m very confident for Saturday night. Okolie is an undefeated fighter so I’m expecting a very tough fight. It will be a strong fight; we can guarantee it so you cannot miss this one.

“I'm hugely motivated for this fight. I’m going to have a great opponent in front of me who has big ambitions of his own. I heard Okolie had some plans to unify, but he has to beat me and it’s not going to happen. I will retrieve my belt and I will bring it back to Poland. I will become WBO World Champion for the third time in my career, there is no other option.

“Okolie is unbeaten, he’s big and he’s strong. He has long arms and a huge reach, but I’ve noticed some weaknesses that you will see on the night. I’m ready for this fight and I’m ready to beat him. You will see on Saturday how I will beat him up. I’ve had a lot of sparring partners who were tall and uncomfortable.

“The support I receive from the Polish people will always motivate me. It’s a shame that they cannot support me in person because a lot of people would have turned out to support me in London, but instead they will be cheering me on in front of their televisions. I'll bring the belt home for them.”

From Hackney, 28-year-old Lawrence Okolie only started boxing at 17 to lose weight after being bullied at school for being clinically obese at over 19 stone. Watching Anthony Joshua in the London 2012 Olympics during his breaks at McDonalds inspired him to take his amateur training seriously and landed him a place on Team GB after just 15 bouts, then entered the very next Olympic Games in 2016, where he was the sole representative at heavyweight. When he turned pro in 2017, he signed with the man that inspired him to box in the first place - Anthony Joshua.

The British, Commonwealth and European crusierweight champion has won five professional titles in just 15 fights and now he challenges for the world title against a former champion with double the experience as a pro.

Poland's Krzysztf Glowacki also had a vaster amateur career than Okolie, winning 103 from 125 amateur bouts, considerably dwarfing Okolie's number of 26, and was a multiple national champion, culminating in winning bronze at the 2008 EU Championships.

As a pro, he has conquered the world by winning the WBO cruiserweight title twice; firstly by beating the joint-longest reigning cruiserweight world champion of all time (shared with our very own Johnny Nelson) with a dramatic performance that saw him hit the deck heavily in round six, yet sprang to his feet and threw back everything he had in return and managed to turn the tables by rocking Huck back. Down on the scorecards, 'Glowka' once more threw everything he had at Huck and dropped him twice to win via TKO11 and foil the German's attempt to break the record in his 14th defence.

Trained by Fiodor Łapin, the Polish southpaw defended the belt successfully to Steve Cunningham, the man famed for dropping Tyson Fury, but lost it to history-making cruiserweight Usyk in his next fight.

He then won his next five fights which included the WBO interim title with a UD12 over Maxim Vlasov in the WBSS (World Boxing Super Series) quarter-finals, which was then elevated to the full world title, but lost it again, this time defeated by Latvian Mairis Breidis in three rounds in the semi-finals, which the aforementioned Usyk went on to win.

That last fight was in June 2019, which means he has been out of the ring for 29 months, whereas Okolie has fought three times since, clocking up 16 valuable rounds to take him into this world title contest as the firm favourite.

Tim Rickson, BBN Editor: “I'm expecting this to be Okolie's hardest fight and biggest test yet, but I also believe that he is going to rise to the occasion and produce a really exciting stoppage. I'm fully sold on everything he has said in the build-up about how he is going to excite - after gaining a reputation for awkward, boring fights - and produce the stoppage, even saying how he is looking forward to watching it back and see the shot that won him the fight. There's lots of factors to back this up and just one of those is how active he has been compared to Glowacki, managing to have three fights since Glowacki last exited the ring, which was after a third-round knockout loss to Briedis."