Fighters stepping into the ring this Saturday, February 22 on the Deontay Wilder vs. Tyson Fury II undercard previewed their respective showdowns at the final press conference Thursday before they step into the ring at the MGM Grand Garden Arena in Las Vegas.

Here is what the fighters had to say Thursday from the Media Center at MGM Grand:

CHARLES MARTIN: “I can’t wait for this. I’m not letting anything get to me, I’m just here to work. I grew up and I am more mature.  I am ready to take on the heavyweight division. My prediction is that I’m going to stop him in four.

“This is going to get me in another good spot and it’ll put me on the way to get my heavyweight title back. This fight is coming at a great time in my career and I feel ready for Saturday.

“It’s a blessing to be in this position. My whole family is going to show up and we’re all excited. My cousin is even going to walk me out to the ring. We’re excited to be a part of this big card.

“Me and Washington sparred a while back, but you have to remember that some people are gym fighters and some perform when the lights are bright. Personally, my sparring has nothing to do with how I perform when it’s go time.

“I’m a heavyweight and we come to deliver knockouts. That’s all I know how to do. Knockout in four. That’s what’s happening Saturday night.”

GERALD WASHINGTON: “I’m very excited.  We put together a great training camp, I went around the world.  I went to London to work with Derek Chisora, and I went to Saudi Arabia and worked with Andy Ruiz.  I brought a great team together and we are just ready to go to work.

“I was able to turn myself into Gerald Washington 2.0.  I have always had the physical part down, I always work hard and train well, but it is the mental side that you need to put together to be a complete fighter and that is where I am at now.  I have a great group of people around me.

“Those who know boxing, know that it’s hard, and everyone goes through their own demons.  I took a loss and it didn’t go my way, but to be able to pick yourself up and keep going, you build that strength.  You become a new person and I’m carrying all that with me. I know what that loss felt like and I’m on a personal mission for me to complete my goals.

“We are locked in mentally.  I did everything to prepare myself for this fight, we are in great shape physically and mentally.

“I know Martin well, and he’s a hard-working fighter.  We will be cool before the fight and we will be cool after, but we are fighting for a title eliminator and we both want the same thing.

EMANUEL NAVARRETE: “I always say yes to a fight. Even though I’ve been fighting quickly fight after fight, I have always come out with good health. That makes me ready for the next fight that comes up.”

“I think my next fight will depend on Saturday’s results. I do think it is more convenient and realistic to move up in weight than to wait for a unification fight.

"Preparation for this fight has been excellent. This is another great opportunity that has been given to me and I will demonstrate once again that I'm the best at 122-pounds.

"I'm going for another knockout victory and after that I would like to unify. If that doesn't happen, I'll probably move up to challenge the champions at featherweight. I want to be a global superstar for the sport of boxing and I'm well on my way.

“I draw inspiration from the other iconic fights between Mexican and Filipino fighters that have taken place right here, especially Manny Pacquiao and Juan Manuel Marquez. It’s going to help me put on another good performance on Saturday.”

JEO SANTISIMA: “I’m very excited and I had a really good camp. We’re ready to put together a great performance and achieve my dream of winning a world title.

“I’m going to be like Manny Pacquiao and win a world title in my first fight in the U.S. Achieving that is a huge motivation for me. It’s an opportunity I’m going to take advantage of.”

SEBASTIAN FUNDORA: “I walk around at this weight. I came to Las Vegas at 157 pounds. I don’t know exactly how it’s so easy, but I make the weight easily and I’m going to be in this division for a while.

“We have different strategies for different fights. Whatever the fight presents and whatever my opponent brings, we’ll be ready.

“I believe this fight is going to be very entertaining. I’m coming for the knockout. Expect a great fight with exciting action. We won’t disappoint.”

“I’m excited to be on a card like this. It’s another great step for me, with a real challenge against a good undefeated fighter. I’m going to bring the fight to him.”

DANIEL LEWIS: “We’re just ready to fight.  We will fight them all, and we will fight the best.  We fought in Los Angeles in November, got the win there, and now we have another opportunity to get a good win. That’s what we are going to do.

“Working with Terence Crawford was another great opportunity that we took on. Getting into camp with him was amazing.  He has such high spirits and is so fast, he is hard to hit.  It was a great experience early in my career.

“I’m very grateful for such a big opportunity. We’re here to make this a great fight and put on a good show for everyone watching.”

SUBRIEL MATIAS: “I’m very thankful for this opportunity. My team has gotten me in great condition and worked with me every day in camp so that I’m ready for Saturday night.

“I’m very excited to be in this position. I promise you that you will not regret watching this fight. We’re going to bring action.

“To my opponent, thank you for taking this fight. I’m here to realize my dream with a win on Saturday and I’m not letting anyone stand in my way.

“I’m not worried about what’s in store after this fight. I’m just focused on Saturday night. I’ll leave the rest to my team, but I’m definitely putting the whole 140-pound division on notice.”

PETROS ANANYAN: “I know my opponent has a powerful punch, but I’ve worked very hard to accomplish my dream. This is very important for me.

“I’ve had great sparring and I’m ready for anything that could happen in the ring. I thought I should have gotten the decision in my last fight, but Saturday I will be able to start a new winning streak.”

AMIR IMAM: “This will put me high up in the rankings, so I am looking forward to putting on a great show and displaying my talents.

“The chemistry with my team is great.  We have fun, but we work really hard.  I want to thank my manager for putting me in a great position, and I am ready to put on a show.

“Molina is just as tall as me, he’s just as quick as me, but I think I have more experience than him due to the title fight.  Skill-wise I believe I am just better than him as well.

“I know I have power, but I’m not depending on that.  I am going out to perform my best and win any way I can, whether that be a decision or a knockout.

“It’s a blessing to be in this position, and I plan to take advantage of every opportunity that’s put in front of me.”

JAVIER MOLINA: “I feel like I have to make a statement in this fight. Just a little over a year ago I was struggling to even get a fight. I’ve been active since then, so I think this fight is happening at the perfect time for me.

“Imam is a tough fighter and a win gets me that much closer to a title. We’re prepared and ready for anything he brings to the ring.

“I’m glad to be in this position. I didn’t think it would take this long, but we’re here now. I’m going to take full advantage of this opportunity in front of a lot of eyeballs.”

ROLANDO ROMERO: “I’m going to get another first round knockout Saturday night. If you know me, you know that when I say I’m going to do something, it’s going to happen.

GABRIEL FLORES JR.: “I try to get better and better each performance. That’s how I learn from my mistakes. I want to put on a great performance Saturday night.

“Back in 2013 I lost my mom, and that was tough. It was someone I was used to seeing every day. Once I heard about Kobe Bryant, I could only think about the rest of his family. I know part of that pain. For me, this fight is for everyone who’s ever felt that pain.”

VITO MIELNICKI JR.: “I’m balancing training and school, but I want to graduate to six-round fights and show I’m more than just a 17- year old prospect. I’m here to stay.

“Being on this stage motivates me, because one day I want my face to be on all the posters and art all over MGM Grand. I’m really motivated to keep working hard and get the job done each and every time out.”

ISAAC LOWE: “I have a good opponent who’s only been beaten by the best. He’s fought world champions and quality fighters, so this is a big step up for me. If I win and put on a good display, it’s going to put me right in the mix with the top fighters.

“You’re going to see on Saturday night that 2020 is my year. I’ve got a worthy opponent who’s going to come to win. So I’m ready and I can’t wait to show the world that I’m a world level fighter.” 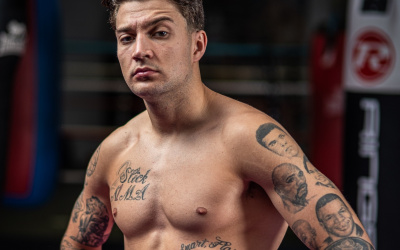