Terri Harper (11-0-1, 6 KOs) was all set to put her WBC and IBO Super-Featherweight World Titles on the line against undefeated WBA World Champion Hyun-Mi Choi (18-0-1, 4 KOs) on a huge night of action at the AO Arena, Manchester on Saturday, May 15, but devastatingly received an injury just weeks before.

She announced on social media: "Absolutely devastated to announce that in my last spar of camp, I have damaged my hand again. Heartbroken is not the word."

Harper looked sensational as she stopped Norway's Katharina Thanderz in nine rounds to retain her WBC and IBO 130lbs crowns last time out in November at The SSE Arena, Wembley on the undercard of Katie Taylor’s win over Miriam Gutierrez.

‘Belter’ clung onto her belts after a thrilling draw with Natasha Jonas at Matchroom Fight Camp back in August, but the 24-year-old produced a far more composed performance to ruthlessly halt her mandatory challenger Thanderz in just her 12th fight. She revealed post-fight that she had damaged her hand and was forced to undergo corrective surgery.

She continued to explain in her statement: "Myself and my team have worked so hard over the last five months to ensure I had the best recovery and had a full training camp with no problems with my hand.

"Thank you to Mike Hayton who, at the drop of a hat, got me in this morning for scans, which shows I've snapped the plate in and re-fractured my hand. Looking to be in next week for surgery."

Despite the bad news, ‘Belter’ is staying positive, stating: I'm only 24-years-old with many big nights ahead, this is just a small setback and will be back stronger than ever. Hopefully this unification can happen before the end of the year, it's still my dream to unify and be on the road to undisputed."

Choi, the longest-reigning world ruler in women’s boxing, beat China’s Chunyan Xu on her professional debut in October 2008 to claim the vacant WBA Featherweight crown before making seven defences of her World Title in the following five years.

The South Korean became a two-weight World Champion when she landed the WBA Super-Featherweight Title against Thailand’s Siriwan Thongmanit in May 2014, and most recently defended it against Calista Silgado on her Matchroom debut at the Seminole Hard Rock Hotel and Casino.

The card hasn't yet been cancelled so it's expected to still go ahead, with a trio of European title fights in store.

'Just Business' came through the toughest test of his career as he stopped brave Croatian Marko Calic in seven brutal rounds to retain his WBA International Light-Heavyweight Title in the main event at the Marshall Arena in Milton Keynes last October.

The 28-year-old has since switched trainers and will now be guided by Virgil Hunter in San Francisco, the renowned coach who oversaw Andre Ward’s legendary career that ended with a perfect 32-0 record and World Titles in two divisions.

Birmingham’s Gamal Yafai (18-1, 10 KOs) puts his EBU European Super-Bantamweight Title on the line for the first time against Jason Cunningham (28-6, 6 KOs) after claiming it with an impressive unanimous decision victory over Italy’s Luca Rigoldi at the Allianz Cloud in Milan. 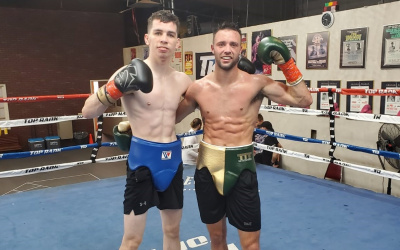