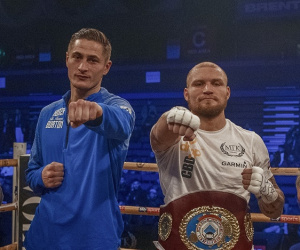 Hosea Burton on Ricards Bolotniks: "If he comes in with no respect he will pay for it big time"

Hosea Burton isn't letting his trip to Latvia deter him ahead of his #GoldenContract semi-final with Ricards Bolotniks - insisting that his opponent may struggle to even get through round one.

Bolotniks earned a first round stoppage win over Steven Ward in the quarter-final, displaying plenty of aggression in the opening three minutes, but Burton feels that fighting style could work in his favour.

Burton said: "It is what it is. Me and Bolotniks would have made a good final, but it's a shame he's got to go out in the semi-finals. I'm happy to know who I'm fighting.

"Unless I picked the Golden Ball I knew nobody would pick me and that I would have to go to Latvia. It being over there won't make a difference for either of us, as nobody is going to get any help off anybody.

"It's going to be an exciting fight. I know Bolotniks will come running forward, but the question is whether he will get through the first round. If he comes in with no respect he will pay for it big time."

Burton vs. Bolotniks comes three days before the other semi-final, as Liam Conroy goes up against Serge Michel in the UK on September 30.