WBO considering Joyce vs Usyk as an eliminator

Head of Queensberry Promotions, Frank Warren, has revealed that negotiations are underway between WBO mandatory challenger Oleksandr Usyk and world-ranked Londoner Joe Joyce for a fight to take place for the WBO Interim heavyweight title, which will allow the undisputed clash between Tyson Fury and Anthony Joshua to proceed without any interruption.

History-making cruiserweight champion Oleksandr Usyk is currently the mandatory challenger for Joshua's WBO heavyweight title, but has been offered step aside money in order for 'AJ' to pursue a fight with 'The Gypsy King' for all the heavyweight belts.

'Juggernaut' Joyce's promoter Frank Warren has revealed that negotiations have begun for the British fighter to take on the Ukrainian in what will be an intruiging rematch to their infamous 2013 World Series Boxing meeting, which Usyk won.

Warren told  iFL TV: “We’re working on, at the moment, Usyk and Joe Joyce. I think the WBO will order that as an ‘interim’ title fight so we’re working hard to make that happen.

“The situation is that the WBO have said they’d like to do that fight as an eliminator. We have no objection to that and I don’t think Usyk has.

“There’s been some preliminary talks and we’ll see where we go from there. I hope [it will happen]. It’s a good fight and I think whoever wins it – based on his last performance, Joe’s looking really good.

“If he comes through it, it puts the winner in a tremendous position. The eventual winner of the two fights between Tyson and AJ will have to defend against Joyce or Usyk, or vacate the belt.”

After defeating his heavily favoured rival Daniel Dubois in their November 2020 fight, Frank Warren promised Joe Joyce a big 2021 where he will be pushing him for a world title shot. 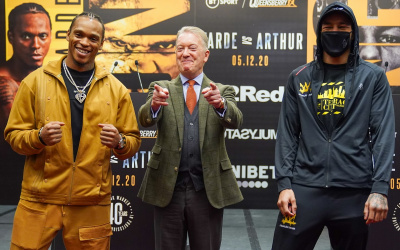