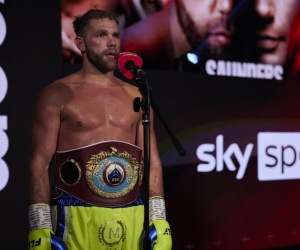 Billy Joe Saunders: "I have the tools to beat Canelo"

Billy Joe Saunders insists that he has every tool possible to beat Canelo Alvarez – as he bids to land a showdown with the Mexican star next year.

Canelo (54-1-2, 36 KOs) was in action on Saturday as he defeated Callum Smith by unanimous decision to win the WBA and vacant WBC super-middleweight titles.

He made it clear after the fight that he wants unifications next, and WBO super-middleweight champion Saunders (30-0, 14 KOs) is determined to get the fight made.

Saunders told IFL TV: “We’re pushing very hard for the Canelo fight. I believe in my heart that I have the tools to beat Canelo. I need to be prepared to beat that man and I will. I’m waiting for the chance.

“I’ll be on the phone trying to get this fight made. I’m missing that big defining fight, and I think you’ll see the best of me. I’ve never been in the ring and not found a way to win Hopefully, the fight can get made now. There is no bigger fight that can be made at the weight.

“If I wanted to get my money [against Canelo], I could have gotten it a couple of times. It’s not just about the money. The money comes with that. I just feel that I have the beating of him.”

Saunders and Alvarez were due to clash before, on May 2, but the global pandemic put a stop to that fight. Then, negotiations for a September fight didn't go anywhere, after BJS claimed the Canelo camp were trying to cut him short.

“There shouldn’t be a reason why this fight shouldn’t get made. MTK is confident the fight will be made as well as Eddie Hearn. So let’s get it on.”