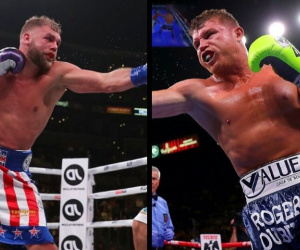 British fighter Billy Joe Saunders has ended negotiations to face Canelo Alvarez in early winter, after stating he was unable to train properly as a result of the ongoing pandemic.

Saunders (29-0-0 15 KO’s) was due to face Canelo (53-1-2 36 KO’s) on May 2, defending his WBO super-middleweight belt after a deal had been finalised. But the global pandemic put a stop to the event and has completely halted recent talks once again.

The 30-year-old super-middleweight signed with Matchroom Boxing in 2019 after splitting with Frank Warren and Queensbury Promotions, in a move that promised so much towards beginning to deliver top fights for the unbeaten fighter.

2021 has to be the year for Billy Joe Saunders

Billy Joe Saunders reveals his 2021 wish list – Andrade in February, Canelo in May

Undefeated Saunders has held two WBO world titles during his illustrious career and has also been a British, European and Commonwealth champion between 2012 and 2015. He was the first boxer from the travelling community to become a two-weight world champion and represented Great Britain at the 2008 Beijing Olympics.

However, his career has been marred by several controversies including, most recently, the suspension of his boxing licence by the Boxing Board of Control in March, after releasing a video about domestic abuse. In addition to this, Saunders has faced a doping scandal, failing a VADA urine test back in 2018.

Labelling the pandemic as being the main reason for his fight withdrawal with Canelo, the Brit has claimed that he would be unprepared physically for the contest, despite travelling to Spain with his trainer Ben Davison for a full fight camp.

During an interview with The Athletic, the southpaw also argued that Canelo should not make light work of his challenge, and that he should be allowed to prepare adequately to perform to the best of his capabilities.

"I’m not ready in September. You can say to me, ‘Billy Joe, a billion pounds, but you’re not ready and you’re going to get beat’. I would say, 'Keep it'.

"Let me get ready, let me win and I will fight for free.

“I’m nobody’s stepping stone. I’m not another belt for Canelo. They want to try mind games; that don’t work with me, I play the biggest mind games in British boxing.”

The unbeaten middleweight also revealed that financial issues played a role in his decision to bow out of the September bout, questioning the original deal that was initially stated.

“If they think they’re going to cut my money and cut me short, that’s not going to happen.

“Considering he’s getting $35million (£28m), they come to me for a pay cut in September? They want to get short notice and a pay cut. Why not him take a pay cut?”

More recently, a war of words has commenced between old rival Chris Eubank Jr and Saunders on social media, with Eubank appearing to claim that drugs played a part in his withdrawal from the fight, which the accused strongly denied, declaring that he will fight another opponent in October.

Saunders remains hugely talented and capable of mixing it with the best on the big stage, but his career is at risk of becoming well-known for near misses if the fight does not materialise later in the year, with Canelo appearing to be eyeing up a huge trilogy fight with Gennady Golovkin in December.

The withdrawal of BJS has opened the door for others to fight Canelo in September, with fellow Briton Callum Smith appearing to be a key contender to take his place.

Where to watch British boxing in July, August and September 2020