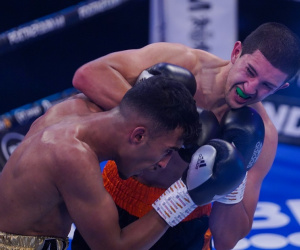 All the participants weighed-in covid-free, so that Hall-of-Fame Promoter Frank Warren's incredible run of shows can continue live, tonight on BT Sport 1 from 7.30pm.

In the main event of the evening, 'The Beast from the East' Anthony Yarde will meet one of Britain's hardest men, Dec Spelman, before hopefully moving on to a domestic dust-up with Commonwealth Champion Lyndon Arthur later in the year.

BBN's Editor, Tim Rickson, will be reporting round by round on all of the fight action from 7:30pm:

Unbeaten Londoner Ali found himself in a really hard fight with an enthused Harrison losing three of the first four rounds, as well as getting a point deducted in the third for holding.

In a surprise upset, 'The Chosen One' Ali lost 37-39 on points in a shock defeat to Thai-born Blackpool journeyman Harrison.

Bradford's Jahanzeb moved up to 8-0 with a shutout points victory over Stockport's 'Devil Child' Quinn.

The fight that had everyone split also ended in the judges being split, with all three scores as 95-95.

Unbeaten Bentley found himself clumsily off balance and spun around and had to run across the ring to escape an attack after nearly falling over. Then, Heffron was down from a straight left in the second. 'Kid Dynamite' was caught off guard and a little off balance momentarilty but wasn't hurt. Bentley was superb in round four, snapping back Heffron's head with a killer uppercut on the counter. Heffron continued to do his good work, boxing on the front foot and landing lenty of punches.

In the seventh stanza, Heffron stunned Bentley in the corner with a left hook and unloaded on him expecting to finish. In round nine, he caught him in the corner again, this time with a heavy right hand. Both men let their hands go freely in the 10th and final round. great effort from both boxers and a clear fight of the night. Thankfully, the fans will get to see it all again.

Spelman stopped for the first time in his career as Yarde produced a sixth-round stoppage.

There was a feeling out process in the first round and not much to report on. In round two, Yarde was trying to close the gap and was coming forward more.

By round three, Yarde was beginning to land his big shots. In round five, the fight was fought in closer quarters. It was a thrilling round as both boxers traded, Yarde finished the three minutes segment with a left hook to the body, but it was a good round for Dec.

In round six, 'The Beast' was whipping in body shots and decided to turn up the heat but he took a few back from Dec in the process. Too many consecutive right hands to the head forced Spelman to take a knee and when he rose to his feet, the referee wouldn't allow him to continue.