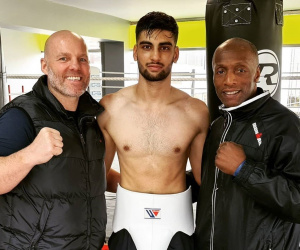 Highly-rated amateur star Hassan Azim is ready to show the world what he is capable of as he prepares for his professional debut on next week's action-packed #MTKFightNight event.

Sough southpaw Hassan Azim faces experienced MJ Hall on the huge show at Production Park Studios in Wakefield on Wednesday 11 November, live in the US on ESPN+ in association with Top Rank, and worldwide on IFL TV.

As an amateur, Pakistan-born hero Azim represented Team GB, winning a bronze medal at the 2018 Youth Olympic Games in Buenos Aires, along with taking silver at the European Youth Championships, and claiming six national titles.

The 20-year-old has been enjoying the transition into the paid ranks, and has lifted the lid on how things have been going alongside his talented brother, Adam, who is also set to make his professional debut with MTK Global in the near future.

Azim said: "I am very much looking forward to making my professional debut. It has been a long time coming and it is now nearly here.

"I am known for my power and the professional ranks will suit me better. I am still going to use the footwork like an amateur, but I will be able to slow it down and throw the right shots. It's not a race, it is a marathon.

"I train with my brother Adam, and nobody trains harder than him. He is an inspiration and what you call a motivator. We not only test each other, but we motivate each other too.

"We are always trying to beat each other's targets and records, so it's great having someone there all the time pushing you hard."

As an amateur, the welterweight was a multiple national chamipion, winning every national title from Schoolboys to Youths. He was the no.1 ranked world youth amateur welterweight and had notable wins over American prospect Otha Jones III, currently unbeaten in six bouts in the US.

His forthcoming opponent was ranked by BBN as one of the best journeymen of 2019 for clocking up an impressive 25 fights during the year, marking his 50th pro bout in November against Prizefighter finalist Lenny Fuller (8-1, 1KOs) in Maidstone.

The 27-year-old from Brierley Hill in the West Midlands managed to score back-to-back wins last October against winning fighters Terry Maughan (10-7-3), who he previously drew with back in March, and Carl Chadwick (5-3).

The Brummie hasn't been stopped in any of his last 26 fights and is now a 60-fight veteran, so should provide the talented Azim with a tough test in his professional bow on Armistice Day.

Who is Gino Kanters? A closer look at Danny Dignum's next opponent