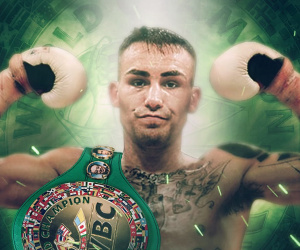 The WBC released this statement following their huge donation to a fundraiser set up for late Lee Noble, who sadly lost his long-lasting battle with leukaemia last weekend:

"World Boxing Council Honorary champion Lee Noble died on March 21 at the age of 33. He was a hardened fighter, father and honorable family man. During his battle with leukemia he was always positive and battled this terrible disease valiantly, proving that he was a true warrior in and out of the ring.

He won the fight against cancer three times and simply moved on, unfortunately died of an infection he contracted during a bone marrow transplant. Lee's family and friends created a page to financially support their children, whom she loved more than anyone in the world. The resources raised will help Lee's children go through life without their father's support."

Canelo Alvarez and Billy Joe Saunders - Over 20,000 tickets sold on day one

Tributes pour in for Lee Noble

The boxing world came together to raise the target of £20k for Lee Noble's young family withing just five days. The crowdfunding page was set up by former Southern Area titlist, Danny Connor.

Despite being deep into a training camp abroad in preparation for Saul Canelo Alvarez on May 8, two-weight world champion Billy Joe Saunders also pledged a sizeable amount of money - £2600 - to his former opponent and close friend.

The Barnsley boxer sadly lost his long-lasting battle with leukaemia and died in Sheffield with his family by his side, aged just 33.

Reigning WBO super-middleweight champion Saunders fought Lee Noble in December 2009, when he was just 4-0, on the undercard of Kevin Mitchell vs Breidis Prescott event in Newcastle. Since then, the pair were good friends and Billy would visit Lee when in hospital in London receiving treatment.

Friend to both Lee and Billy, former Southern Area titlist Danny Connor is the driving force behind the campaign to raise £20k for the young family Lee Noble leaves behind. So far, as of March 25, over 300 people have rallied together to raise well over £17k in a heartwarming gesture during a time of financial uncertainty and furloughs.

An ambassador of The Amelia Mae Foundation, bighearted 'Cassius' Connor said, "Weʼre raising £20,000 to Lee Noble's kids to help them through their life without their father there to support and provide for them. We’re up to £13,700 on the appeal, I’d be confident of the £20,000 by Friday! Please keep retweeting and donating or even put a little post/message yourself with the RT."

Frank Warren also donated a substantial fee towards the cause.

You can too by clicking here and giving whatever you can afford: Lee Noble Just Giving Page