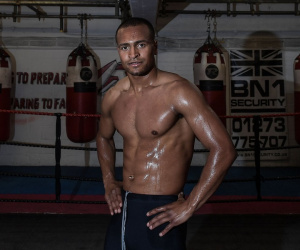 Who is Harlem Eubank?

Facts about Harlem and what relation he is to Chris Eubank Jr?

Ahead of his English super-lightweight Eliminator with unbeaten Daniel Egbunike (6-0, 3KOs) tonight, BBN ask the question, 'Who is Harlem Eubank and what relation is he to Chris Sr and Jr?'

Harlem Eubank is currently 10 bouts unbeaten in the professional boxing circuit with three knockouts. He stepped up a level in his last fight to take on Medway's Martin McDonagh (8-2) and managed to stop the highly-rated southpaw from Sheerness in the eighth and final round.

The 26-year-old from Brighton has followed in the footsteps of his talented fighting family, winning 22 from 33 amateur bouts, including success in the prestigious Haringey Box Cup.

His dad, Simon, is Chris Eubank Sr's brother. Simon was a pro boxer himself during 1984-1992, winning seven contests and losing 20. His last professional fight in January 1992 was a TKO4 loss against Kevin Lueshing, who went on to win the IBO World welterweight title and challenged modern-day great Felix Trinidad for the IBF World welterweight title.

Simon and Chris Sr. also have another brother called Peter, and a sister, Jocelyn. Their parents were Irvin and Ena Eubank.

Chris Jr said of his cousin, Harlem, "We are very close. Harlem is a slick fighter, good foot movement, good speed, one of those all-round fighters; he's good at everything. He's very exciting to watch."

The eccentric family from Sussex have a long history with boxing.

Chris Eubank Sr was a two-time world champion and one of Bitain's greatest ever fighters, especially remembered for his exciting rivalry with Nigel Benn.

Eubank Sr has an estranged son, Nathaniel Wilson, from a previous relationship with the mother Cynthia Wilson during 1987-88, but they didn't speak for 27 years before they settled their differences around 2015.