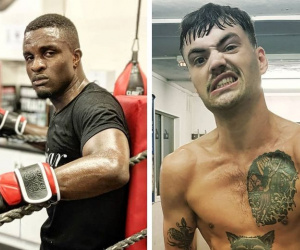 What really happened between Ohara Davies and Tyrone McKenna

- Ohara Davies: "I threw him against an ambulance. Next time, I’ll put him in the ambulance!"
- Tyrone McKenna: "He choked me and I choked him back. Then he went all quiet and s*** himself."

There are two sides to every story; not least the weekend’s fracas between Ohara Davies and Tyrone McKenna.

The super-lightweights, who many hope will collide in the first round of the #GoldenContract 140lb quarter-finals at York Hall on November 22, were involved in a controversial incident at the featherweight curtain-raiser on Friday.

The opening moments of their first flashpoint was captured on iFL TV in the car park and the pair continued their running battle inside the venue before emerging with very different versions of what transpired.

Davies said: “The way I dealt with him was I threw him against an ambulance. He tried to come at me the wrong way.

“If you come at me on a friendly tip then I’ll be friendly back but when you try and come at me in a forceful and disrespectful way, I have to act. Next time, I’ll put him in the ambulance rather than throw him against it.

“I might pick him in the #GoldenContract. I have freedom. He better hope he picks the blue ball so he can pick me and get his a*** knocked out.

“Tyrone McKenna – don’t come at me like that again and invade my personal space. It’s not a good thing to do. I guess you’ve learned now. Have a good day.”

McKenna said: “I came out because I heard he was doing an interview and he said he was going smash me next time he saw me.

“I put the head on him and he didn’t smash me, so he’s not living up to what he’s saying. He choked me and I choked him back. Then he went all quiet and s*** himself.

“After that, he came back in to go for it when we were inside because he knew there was lots of security there. I came out where there was NO security.

“How did he teach me a lesson? Kugan broke it up relatively quickly because it could’ve escalated a lot more but Ohara’s getting chinned next month – I swear to f***.

The draw for the #GoldenContract super-lightweights will be made on November 19.

Who is Billy Joe Saunders’ next opponent Marcelo Esteban Coceres?