Cox and Zaxo add excitement to Avanesyan vs Kelly undercard

Two Goodwin Boxing prospects were announced on the undercard of the massive Matchroom promoted David Avanesyan vs Josh Kelly at the O2 on March 28.

Unbeaten bantamweight Sam Cox (5-0, 1KOs) and hard-hitting undefeated light-heavyweight Dana Zaxo (6-0, 2KOs) were the fortunate pair from the Goodwin stable that who got the nod and will now appear live on Sky Sports.

Promoter Steve Goodwin said, “We have an excellent working relationship with Eddie [Hearn], Frank Smith and all at Matchroom and we are pleased to help supply them with quality talent for this huge card.”

“It’s another great opportunity for these two exciting ﬁghters, it’s a great card but its even better now with these two added.”

Islington's Cox, who is unbeaten in five contests, is looking towards titles this year.

The 25-year-old beamed, “I am excited to be added, I can’t wait to put on a performance again for the whole of the O2. I can’t thank Steve enough for getting me this opportunity.”

24-year old Dana “The Savage” Zaxo has the power to light up any arena, unbeaten in six contests and always brings a very vocal crowd.

The 175-pounder said, “I appreciate the opportunity, the main event is a superb ﬁght, I look forward to adding to that excitement.”

About Goodwin Boxing: Goodwin Boxing is a prestigious sports management company based in Leighton Buzzard that have been revolutionising professional boxing management since 2014. Headed by BBBofC licensed manager Steve Goodwin, the company ensures honesty, integrity & professionalism are the foundations on which all business is conducted. In 6 years the company has guided 36 boxers to professional titles from Southern Area to World Champions. Goodwin Boxing also operates a franchised promotional arm which has allowed them to work with multiple diﬀerent BBBofC licensed promoters, oﬀering experience, guidance and granting them a platform to deliver to a wider audience. So much has been the success that Goodwin Boxing has been voted promoter of the year for the past two years (2018 & 2019) as voted for by the BBBofC Southern Area Council. 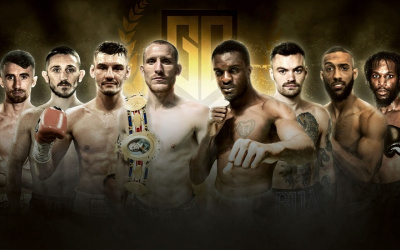