It was another incredible night of action as the #RotundaRumble3 took place in front of a passionate crowd at Caesars Bluewaters Dubai on Friday.

The massive event was live in the US on ESPN+ in association with Top Rank and worldwide on IFL TV, and featured a number of incredible stoppages and exciting fights.

Aliu Bamidele Lasisi successfully defended his WBC International super-flyweight title after a split draw with Norbelto Jiminez, while there were knockout wins for the likes of Cesar Mateo Tapia, Zhan Kossobutskiy and Nurtas Azhhbenov.

A big upset on the card saw former world champion TJ Doheny suffer a defeat, as he was beaten by Ionut Baluta.

Here’s all you need to know from a fantastic night of action….

Lasisi said: “My opponent was a good fighter who has fought for world titles before but I thought I won the fight. I’m proud that my fans came out and showed me the support.”

Date said: “I was buzzing in the back all day as there are some superstars on this show and I want to be at that level.

“This is the first time I’ve shown everyone what my boxing ability is like and I hope everyone enjoyed it against an opponent who was strong and tough.

“It’s great being out here in Dubai as I’ve got a big fan base here, and MTK Global and Round 10 Boxing are doing fantastic things.”

The #MTKFightNight action returns tomorrow as a massive card takes place at the Brentwood Centre in Essex, with Danny Dignum (12-0, 6 KOs) defending his WBO European middleweight title against Alfredo Meli (17-0-1, 5 KOs) in the main event. 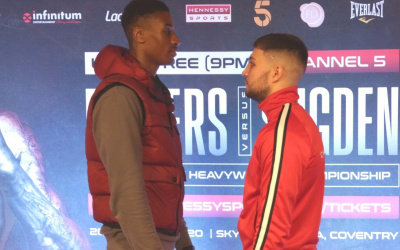 Chad Sugden: "It would be stupid of me to try and box Shakan Pitters"