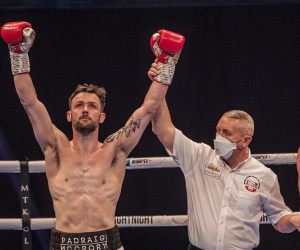 Padraig McCrory is excited to test himself against someone that shares the same ambition as him as he prepares to face Germaine Brown on Friday's huge #MTKFightNight.

It sees Irish star McCrory look to continue his rise through the 168lb division, and he's looking forward to testing his skills against a tough opponent.

McCrory said: "I'm super excited, and I'm thankful that I've been given another opportunity in the current climate to progress my career.

"It was a great win for me last time out against a good opponent. I put on a massive performance and I want to continue that. I've watched some of Brown and I think he's a good fighter that is ambitious like myself, so I look forward to the challenge.

"The gym has been flying at the moment. Lewis Crocker fought last week, I'm out on Friday and then Owen O'Neill on Saturday, so it's been good that we've been able to bounce off each other and push each other in every session.

"I'm not looking past this fight at all, but if all goes as planned, then I would love to push towards some big titles next."