Touted as one of the planet’s brightest young prospects after a flurry of early knockout wins, 19-year-old Dennis McCann (5-0, 4KOs), signed to Frank Warren, is just as engaging outside the ring as he is ruthless in it.

‘The Menace’ from Maidstone has already wowed huge TV audiences and the Royal Albert Hall, a football stadium and Féile an Phobail with stoppage victories and ended his maiden year as a professional at 5-0 with 4 KOs. Just the one opponent faced with a winning record - Jerson Larios (7-6) - has managed to hear the final bell.

#MTKInsideAccess sat down for an in-depth interview with the teen sensation, who won a staggering nine national titles as an amateur and has already sparred the likes of Michael Conlan and former world champion Ryan Burnett.

#MTKInsideAccess: Mr Menace… Tell us a bit about how you got here – knocking people out on huge TV events – by the age of 18?

McCann: "I got into boxing as early as three-years-old – that’s when I started going to boxing gyms because my older brother was boxing. He was a very good amateur. I was always a bit of a rebel – running around the gym punching and slapping everyone. I’ve pretty much been boxing my whole life, really.

"I have to credit my brother and my father for encouraging me. My brother is quite a bit older than me and I used to look up to him and see him winning titles. Through him, I got a little taste of it and I quickly decided I wanted to win titles for myself.

"It’s exciting for me and my brothers to be in a fighting family. It’s been that way our whole lives because our Dad used to box. I actually think the youngest brother, little Richard, is going to be the best one out of the lot of us, if I’m being honest. He’s only eight-years-old but he absolutely loves the sport. He trains every single day and I don’t even have to ask him to; he just does it himself."

It seems a pretty dramatic rise to be so far advanced already. What did you have to sacrifice along the way?

McCann: "I was selected by Repton Boxing Club, which as everyone knows is one of the most famous amateur boxing clubs in the land. Because of the fact I lived so far away from it (quite close to Birmingham), I had to drop out of school at 10 or 11 years of age in order to be able to get to training in time.

"As a result, I was going to work for my Dad on building sites roofing by that age. I used to go to work in the morning, graft away and then leave for training because it took a good few hours for me to get there. I had to drop out of school to get to where I am now.

"I’ve always been a very mature kid, I suppose. Because I was on site at such a young age, I was around people a lot older than me. Therefore, when my opponents try and intimidate me now, it doesn’t work. I’m not scared at all. In fact, I’m not scared of anyone except my Dad. I still fear a beating off him!"

What were you like at school? A bit of a rascal?

McCann: "I suppose so. I guess I was quite a tough kid but I was never ever a bully. In fact, I used to beat up the bullies and that would actually end up getting me in trouble. I suppose you could say I was pretty naughty in school but I wasn’t there for very long.

"If it wasn’t for this boxing game. I reckon I’d be a roofer, building things with my Dad. That’s his business and I’ve already had quite a lot of experience in it having worked with him when I was younger.

"I’m as thick as a piece of steak really. Well, I’m clever in some ways but thick in others if you know what I mean. I certainly speak my mind… maybe that’s half the problem!

"Some say I still look like I’m school age and I often get underestimated. The thing is, I keep getting these jobs done in great fashion. Looks are deceiving and when you’re in that ring man to man, nobody can do anything for you. It’s just you. That’s why I train as hard as I possibly can because with each and every fight, there’s no second chance."

You’ve had a taste of the glamour early in your career. With that comes pressure… Is there a danger it goes to your head?

"I don’t fold under pressure. I shine. I like the pressure. It only helps me perform better. Some fighters collapse under it but it’s just a normal thing for me. Even in the amateurs, there was a lot of hype surrounding me but I just carried on doing what I was doing and that’s knock people out.

"I’m in this game to be in the history books. It’s either in you or it isn’t and people can see it’s in me. Therefore, this is all normal. I know people have these big expectations of me and that just gives me more and more motivation. I definitely think I can live up to the hype and be a star because all the attention does is make me train harder and harder.

"I know the sport is more glamourous for some than others. Some people only get to fight on small-hall shows for peanuts but I’m already having great treatment from Frank Warren and MTK Global. Look at the places I’ve fought already. You can see it’s going well. At the same time, I know how hard this boxing game is."

You seem to have it all sussed out! Surely you have people helping guide you amid all this chaos?

"Of course I do. My trainer Al Smith has become like a second father to me. He’s had a huge impact on my life and has helped me inside and outside the gym.

"I’ve also got ideas of how I want to do things. It’s no secret I want to be a star and earn millions but I’m not going to be silly about things. I’m not the flashy type. I’ll have a nice car but it doesn’t mean much to me – it won’t be anything too flash. You won’t see me dripping in bling or anything like that. I’m going to invest my money wisely. The long-term plan is to buy a site and hire out mobile homes so my money works for me.

"I want to build myself a good life. If I have kids and they want to box, I’ll let them do whatever they want to do but like I said – I know how hard this game is so if they don’t have the talent, they won’t be following me into this sport.

"As for inside the ring, when I get out there I just want to go to war but my coach keeps me calm. I’ve got a bit of the devil inside me. I want to go and hurt people but that’s what I’ve got a coach for – to keep me cool, calm and collected. Al does that…"

McCann’s first outing of 2020 will be on the undercard of the highly anticipated return fight between British super-bantamweight champion Brad Foster (11-0-2) and challenger Lucien Reid (8-0-2) on February 22. Their first encounter ended in a draw after 12 enthralling rounds.

Reality TV star and youngest of the fighting Fury family, Tommy Fury (3-0) will also be in action on the York Hall card, along with debutant Muhammad Ali.

A word from our sponsors:

Since our launch in 2017, HÖRFA have always had a strong connection to art, displayed through our popular Printed Streetwear Collection.

Now, for the first time ever, we’re giving you the chance to create the next iconic print, in support of the NHS.

Your design can be anything you want, there are no set themes or limitations. Be inspired by nature, art, people, hope, ambition… your canvas is blank because we want to see your creativity in its fullness.

Visit our website HERE. We recommend submitted artwork is in the ratio of 210x140mm/px at 300dpi in .png or .jpg format. You can go taller than 140mm/px if you wish the design to be square or portrait. If you don’t have design packages or tools available, we recommend canva.com as a useful website to use.

Email your design to [email protected] by June 30, 2020, with a few words about the inspiration and meaning behind it.

Three finalists will be chosen and unveiled on the official HÖRFA website and social media channels on July 1, 2020.

The winner, chosen by the HÖRFA design team, will receive a £100 gift card as well as the final version of their t-shirt design sent in the post.

The winning design will be sold on horfawear.com with 100% of the profits donated to the NHS. 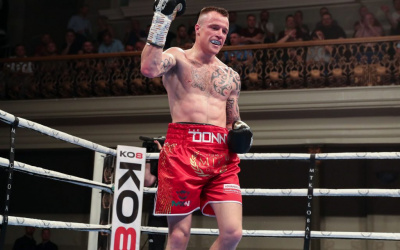 Steven Donnelly calls for a shot at Hamzah Sheeraz this year