Goodwin Boxing have announced the signing of undefeated middleweight John Harding Jr (5-0-1), 34 from Brixton, on a three year management contract.

Harding has built up a six-fight undefeated record and has recently changed coaches to join former English title challenger Leon McKenzie after obtaining his coaching licence.

“I managed Leon in the latter part of his career,” said Steve Goodwin. “We worked really well together and I am delighted to be working with the first pro fighter under his tutelage. We aim to keep John busy and this will start on 15th September on the fantastic BRAWL IN THE HALL card with a great top-of-the-bill fight - Joel McIntyre v Miles Shinkwin for the English title. We will box again before the end of the year and move into title contention in 2019. I believe we will be working towards super-welterweight for titles and am sure John will have success in his quest for belts.”

The six-footer from south London added, “I am delighted to be working with the Goodwin team. They will be giving me fantastic support in my career and I cannot wait to start working with them.”

Harding Jr has won all five fights on points with one draw between February 2017 to April 2018, experiencing 24 professional rounds in the pro rans so far.

Harding Jr fights alongside eight other unbeaten boxers on September 15 at the York Hall. 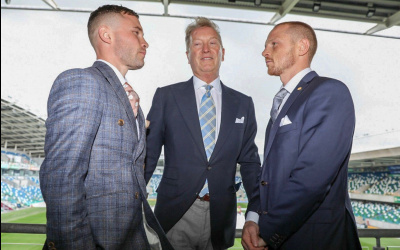 Paddy Barnes: 'I'm a triple Olympian who’s been boxing for 20 years. If I’m not ready now, when will I be ready?’