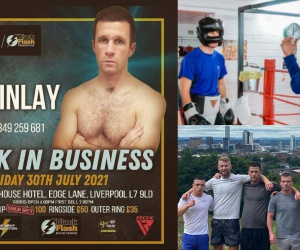 Undefeated welterweight Jack McKinlay (2-0) heads back to the ring for the first time in 17 months, as he enters into his third professional contest at the Devonshire House hotel in Liverpool on Friday, July 30.

Jack ‘The Ripper’ will compete in a four-round contest against an opponent yet to be named on a co-promoted Queensberry and Black Flash Promotions event, aptly titled ‘Back in Business’.

The 31-year-old from Anfield, who won 26 from 32 amateur bouts, shared his delight at being back in the gym working towards a fight date for the first time in a long time, “Yeah, this training camp has been better than ever, if anything, because I’ve missed it so much!

“Been back working hard, getting the weight off; I did have a bit to get off at the start, but I don’t ever go too heavy anyway. For this fight, I will do super-welter, but I’ll go back to welter in my next one.”

“There’s four or five of us in the gym,” continued Jack, “and we’re just doing what we normally do, training hard, learning, improving, but it has been decent since getting back to it and I’m starting to feel like I’m in good shape again now.”

Despite the hiatus and extended frustration known as itchy knuckles, McKinlay believes he will practice patience when he finally gets back in the right for fight night, “I’m not gonna let the excitement work against me; they might be journeymen in front of you, but they’re still dangerous.

“To be honest, I want to work on certain things I’ve learnt in the gym; I’ve been working on a few little things I want to try out.

“Every fight is different, you could be training for a fight thinking of boxing a certain way but when you get in there, it’s always different and you have to adapt. I’m just going to do my thing and get that ring rust off.

“Obviously, everyone wants to go in there and stop them for an early night, but I just want to work on what I’ve learnt.”

After a long period of uncertainty, things appear to be heading back to normal again, with many boxing events planned in the UK in the coming months. Because of this, Jack has allowed himself to look ahead to the future, he says, “Yeah, I do like to have a vision and I’d like to be 5-0 going into next year with no injuries, but I’ll take every fight as it comes.”

McKinlay’s first two fights were at welterweight, which is the division he plans to win titles in. Two other well-known 147-pounders, Kell Brook and Amir Khan, have recently reignited fight talks once more. The former world champions have been linked to a showdown for many, many years, and look set to finish their careers by finally fighting each other.

A keen boxing fan, McKinlay immediately admitted he would still be interested in watching this fight despite being so overdue, “Yeah, I would to be honest, I know a lot of people think it’s too late now, but I’d still watch it; much rather that than some YouTuber or something!

“Back in the day, Amir Khan would have won through his speed, but at this stage of their careers, I think Kell Brook wins. They say power is the last thing that goes, so I think Brook stops Khan, but I’m still interested in watching that fight if it happens.”

The following day after McKinlay’s fight sees the return of the successful series of Matchroom’s Fight Camp.

McKinlay will be watching on DAZN, hopefully as a 3-0 fighter, he commented, “I’ll be watching Fight Camp after my fight because I always watch boxing.

“I like watching Conor Benn, so I’m looking forward to his fight. I think he’s decent and underrated, but he’s coming into his own now. He’s good to watch, I like his style.

“I’d like to see him fight Florian Marku next, but I think Benn would stop him. He’s quite a character that Marku, he’s quite funny, but it’s definitely a fight I would like to see.”

McKinlay’s third professional opponent has yet to be confirmed. In his first two assignments, he defeated 200-fight veteran William Warburton on points during his pro debut in September 2019, then he followed that up with a points win over ‘The Congo Leopard’ Michael Likalu in February last year, which was his last time under the lights until now.

The Friday fight night event on July 30 is suitably named ‘Back in Business’ and also features McKinlay’s stablemate Carly Skelly (3-0-1), from nearby Litherland.

Former English super-flyweight champion Marcel Braithwaite (9-3) heads back to the ring for the first time since back-to-back defeats to world title contender Jay Harris and Britain’s newest world champion Sunny Edwards, who Braithwaite knocked down during their 2019 British title clash.

Mozambique-born Merseysider Dexter Makaza (1-0), a 27-year-old light-heavyweight from Liverpool, is also in action on the night; as are debutants Leon Willings from Widnes, and Rebecca Ainscough from Liverpool.

Tickets are £50 for ringside, and £35 of outer ring seats. You can contact Jack McKinlay on Facebook for tickets HERE