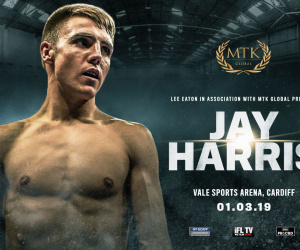 Jay Harris signs with MTK and reveals date of next fight

Undefeated Commonwealth flyweight champion Jay Harris has signed a promotional deal with MTK Global and will fight on the Cardiff show on March 1.

The Welshman has blasted to 14-0-KO8 since turning professional in 2013 – winning the title in both 2017 and 2018 – and now has other belts in mind after a brutal three-round stoppage of Ross Murray last time out. Prior to that, he won all six rounds against Nicaraguan Cristian Narvaez (15-9-4) on August 11 to dust off the ring rust following a nine-month absence from the squared circle on a British Warriors Boxing event at the Llandarcy Academy of Sport in Neath, Wales.

Harris, 28 from Swansea, said: “I’m really excited to have joined the MTK Global team and I believe with them backing me, I’ll finally get the fights I deserve and push on towards major titles.

After his controversial defeat to Lewis Ritson, Miguel Vazquez signs with MTK Global

“These iFL TV shows are such a good thing for the sport. They give relatively unknown boxers the platform on which to be seen and a chance to connect with new fans. The popularity of streaming is going from strength to strength.

“My goals for 2019 are pretty simple. I just want to win titles and I know MTK Global will help me do that. I’d love a British title shot by the end of the year so we’ll see how things go.

“I rate myself highly despite the flyweight division being competitive. I’ve sparred with some of the best flyweights and super-flyweights out there already and I’ve more than held my own.”

Promoter Lee Eaton said: “We’re delighted to have secured this promotional deal with Jay, who’s one of the most exciting flyweights out there. We saw that in his last bout.

“As these shows continue to take off we hope to have fighters like Jay grace the stages and give the fans what they want – boxing entertainment.”

Alongside Harris on a growing card in the Welsh capital is IBF European super-lightweight champion Akeem Ennis Brown defending against Bilal Rehman, Jacob Robinson vs. Jonny Phillips and many more.

Get to Know… Miles Shinkwin