All the details you need to watch Ultimate Boxxer 4

The Ultimate Boxxer IV tournament will give the competing boxers a chance to make a name for themselves in front of a national audience - along with a huge portion of the £50,000 prize money - live on BT Sport.

BBN listed all of the details viewers need to know:

Craig Richards vs Shakan Pitters and other British Championship news

Who is fighting at Ultimate Boxxer 4?

After the overwhelming success of UBII in London, which unbeaten light-heavyweight Shakan Pitters won, BT Sport took over the broadcast rights.

Who is the favourite?

London-based Mikael Lawal is the overwhelming favourite to win the tournament, priced as low as 1/10 with MansionBet.

Managed by Aamir Ali and promoted by Nisse Sauerland - since turning pro in 2017, he’s accumulated nine wins from nine fights, and six by stoppage.

Nicknamed ‘The Beast’, Lawal has learnt from sparring with the likes of Oleksandr Usyk and Tony Bellew, as well as Team GB Olympian Lawrence Okolie.

He said: "There’s definitely going to be some explosive fights. I always force the action so this will suit me. Unlike a lot of the others, I’ve got the one punch hit to take you clean out. I don’t think the others are as ready as me. It’s my time to step up."

Who is on the undercard?

How can I live stream Ultimate Boxxer?

The BT Sport contract states that a minimum of five Ultimate Boxxer events will be broadcast live by BT in the UK and Ireland.

As a result, you can catch all the action on BT Sport's YouTube channel.

If you want to live stream and have a BT subscription, this will allow you to watch on either channel by downloading the official app on your mobile, tablet or PC.

Can I watch it for free?

THOSE of you without a BT subscription can head over to the official YouTube channel.

Whilst there will also be coverage and analysis throughout the night on the Ultimate Boxxer Youtube channel.

Those with EE Sport phone contracts can also get a 3-month free trial of the BT Sport App.

Ryan Rhodes talks Terri Harper vs Nozipho Bell, sharing the ring with Canelo, and his future in boxing 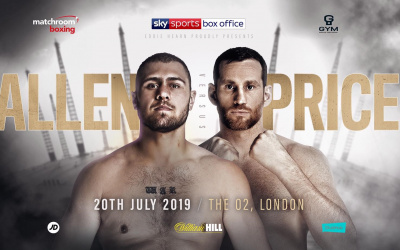