As the seconds ticked away on Deontay Wilder’s five-year reign as the WBC heavyweight titleholder, the Alabama star looked like he would rather be anywhere else in the world than in a prize ring with Tyson Fury.

It was February 22, 2020, at the MGM Grand in Las Vegas and the rematch the world had been waiting for had descended into butchery. Fury, the cerebral switch-hitter, had turned into a rampaging tiger, and Wilder, the monstrous one-punch destroyer, was the helpless prey – a wounded deer awaiting the terminal strike. Predictably, another Fury right hand crashed home and the blood sprayed under the arc lights. It was at that moment when Wilder’s trainer, Mark Breland, elected to throw in the towel and end the slaughter. The official result was a TKO for Fury at 1:39 of the seventh round.

The fight had been decided in just 19 minutes and 39 seconds, but Fury’s journey had taken years and featured many treacherous twists and turns. After outpointing the legendary Wladimir Klitschko to become champion in November 2015, the enigmatic Fury had battled alcoholism, recreational drug use, obesity and a mental health disorder. As well as all that, the revelation that he’d tested positive for a banned substance (nandrolone) in early 2015 had damaged his reputation. However, with the UKAD case behind him and a two-year retroactive ban served, an almost unrecognizable, 400-pound version of Fury confirmed that he would return to the ring in early 2018. Some critics felt that his pursuit belonged under a circus tent.

How wrong they were!

After losing approximately 140 pounds in weight, Fury posted routine wins over Sefer Seferi (TKO 4) and Francesco Pianeta (UD 10) to set up what appeared to be a premature title shot against Wilder on December 1, 2018, in Los Angeles. Fury, however, boxed beautifully at times, befuddling the American with an unconventional mix of defensive prowess and ring generalship. Wilder struggled terribly through eight rounds, dropped his man in the ninth, and a brutal final-round knockdown looked identical to the fight-ending shots that had defined his career. However, Fury rose from the ashes, fought back hard, and he was deemed very unlucky to come out on the wrong end of a controversial split-decision draw.

Undeterred, Fury continued to shed the ring rust in 2019, easily stopping Tom Schwarz (TKO 2) and outpointing the tougher-than-expected Otto Wallin (UD 12). Meanwhile, normal service resumed for Wilder, who knocked out Dominic Breazeale (KO 1) and Luis Ortiz (KO 7) with devastating right-hand shots. The public, however, was clamoring for a rematch. Fury rooters drew confidence from the fact that Wilder couldn’t beat their man when he was inactive, whereas “The Bronze Bomber’s” faithful were convinced that he would put his rival on the canvas once again – and keep him there.

Never one to lack confidence, Fury was convinced that he would right the wrongs of the first encounter. “The Gypsy King” left his days of gluttony behind him, stayed in shape year-round, and he also drew strength from a new challenge. “I’m an ambassador for mental health, and I take a positive from every negative,” Fury told The Ring before the rematch. “The first fight was a negative in hindsight, but it was a positive in life. It was a positive because I came back from the brink of no return. After three years out of the ring, I was back to my best and I beat the current WBC heavyweight champion. I didn’t get it on the scorecards, but it was a victory in my mind.

“Deontay Wilder now has to get back in the ring with The Gypsy King for a second ass-whipping, and I’m looking forward to handing him one. I’m gonna open a can of whup-ass on this guy! I’m more active; I’ve had two years of activity. This is my sixth fight back, and I’ll be ready.”

With new coach Javan “SugarHill” Steward replacing Ben Davison, the decision was made to formulate a more aggressive game plan in order to maximize Fury’s superior size and strength. Weighing in at 273 pounds (19 pounds heavier than in the first encounter) was by design, and a 231-pound version of Wilder looked like a splinter by comparison. A merciless Fury dropped his rival in the third and fifth rounds and was pitching a shutout on two of the three official scorecards when the fight was stopped. In truth, it was more mismatch than rematch.

Not only did Fury capture the WBC belt, but he also made history by regaining the Ring Magazine heavyweight championship. That title had remained vacant ever since Fury was stripped for inactivity two years earlier, and he is now one of only three men to win the belt more than once (Muhammad Ali and Floyd Patterson are the others). There were also calls for the Manchester-born colossus to enter the pound-for-pound top 10, and while he hasn’t made the list yet, a place in those mythical rankings is most certainly within his grasp.

For now, Fury will have to be content with being Fighter of the Year for the second time. He received the honor in 2015 thanks to his 12-round unanimous decision win over Klitschko, and Fury now makes history once again as the only British fighter to receive this award twice. On this occasion it will be shared with his friend and Top Rank stablemate Teofimo Lopez, who scored a sensational upset win over Vasiliy Lomachenko in October.

As we go to print, the future for Fury could be labeled both simple and complex. In order to get a rematch with Wilder, the 32-year-old Englishman had to agree to a third fight in the event that he won the second. The bout was scheduled more than once in 2020, but COVID-19 and network concerns over college football dates got in the way. Fury then committed to a December tune-up, but that plan fell through when his financial requirements reportedly could not be met. There has also been talk that the long-awaited showdown with unified titleholder Anthony Joshua could take place first, should Wilder opt to go in a different direction.

Wilder hasn’t had too much to say over the past several months, although he did manage to concoct some elaborate excuses for the first loss of his professional career. His pre-fight ring outfit was apparently too heavy, he may have been drugged by members of his own team, and then there were allegations that Fury’s gloves were loaded with something resembling egg weights. There are fans who have bought into the conspiracy theories, but most are of the opinion that Wilder is struggling to accept what happened and is in dire need of a top-quality PR team. Regardless, a third fight sells simply because Wilder remains one of the most chilling punchers in heavyweight history.

But the trilogy is for the future. The year 2020 was an exceptional one for Tyson Fury and he deserved all the kudos that came his way. There were many who felt that he could never get into the type of condition required to compete, much less prevail at the highest level.

Given the predicament he was in, mentally and physically, and the nature of his sport, there has been talk that Fury’s return to glory is among the best in sport’s history. And the champion has no intention of going back to the dark side.

“I’m in a much better place,” said Fury in an editorial column for The Ring Magazine earlier this year. “When I beat Wladimir Klitschko, I’d achieved what I set out to achieve and there was nothing more to prove. I didn’t want to be in boxing, defending titles – I had no interest in it. I went away, had time out of the ring, ballooned up in weight and then I came back. I always need a challenge. After I beat Klitschko, there was no challenge. The real challenge for me was taking all the weight off and coming back from the brink to beat someone that nobody thought I could beat. And what happened? I beat Wilder easily, because I raise my game for different challenges.”

Write this man off at your peril. 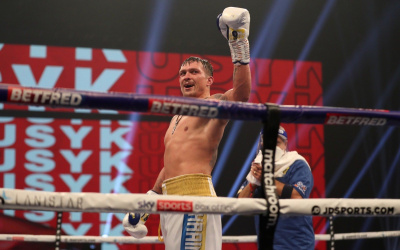