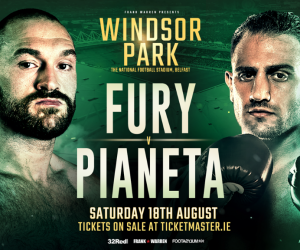 'The Gypsy King' Tyson Fury (26-0) returns to the ring for the second time since his comeback to face former European champion Francesco Pianeta (35-4-1).

The Lineal world heavyweight champion follows on from his dominant stoppage of Sefer Seferi in Manchester on June 9 and will continue his march back towards the top against a two-time world title challenger from Italy, promising coach Ben Davison there'll be no showboating this time, strictly business!

Pianeta, who won the WBC world youth crown before picking up EBU and WBO European titles, has twice challenged for world honours – losing to Wladimir Klitschko in 2013 and to Ruslan Chagaev two years later.

Both fighters are plotting their way back to world title contention and BBN provide you with all the details you need to watch the next chapter of Tyson's career:

Windsor Park in Belfast - home to Linfield F.C. and tenants Northern Ireland national football team, and is also where the Irish Cup final is played each year

10 three-minute rounds at the heavyweight limit

Despite Tyson being ranked no.7 with the WBC and no.1 in the IBO ratings there is no title on the line in this fight

In the penultimate fight of the night, Fury and Pianeta are expected to make their ring walks at approximately 9pm, but boxing events are often subject to delays

BT Sport have the exclusive rights to the fight in the UK and TV coverage starts on BT Sport 1 from 7.45pm, straight after the Chelsea vs Arsenal Premier League fixture has finished

Dublin’s WBO European middleweight champion Luke Keeler (14-2-1-KO5) will make the first defence of his crown against a top-rated opponent, targeting the winner of Tommy Langford vs Jason Welborn next.

Further down the card, welterweight KO king Lewis Crocker (6-0-KO6) is looking to continue his astonishing start to life as a professional. The Belfast boy has halted all six of his opponents to date inside three rounds.

Another local star added to the action is super-featherweight Marco McCullough (19-4-KO11), who has previously challenged for Irish, British, European and Commonwealth belts and is looking to continue his journey back into title reckoning.

Middleweight Conrad Cummings (13-2-1-KO6) will be eager to bounce back on a big stage after a European title defeat last time out while former Team GB super-lightweight Sam Maxwell (8-0-KO6) bids to continue his flawless record.

Two-time Commonwealth Games medallist Steven Donnelly debuts at light-middleweight while former Northern Ireland captain Sean McComb is handed a chance to shine in his hometown in his pro bow.