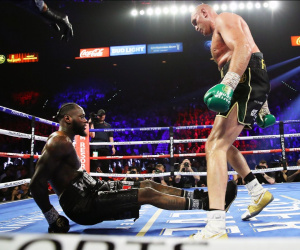 Tyson Fury vs Deontay Wilder 3 is off

Tyson Fury will not fight Deontay Wilder next

WBC World heavyweight champion Tyson Fury (30-0-1, 21KOs) said he will not be fighting Deontay Wilder (42-1-1, 41KOs) this year, and plans to compete back in the UK in December instead.

Tyson Fury-Deontay Wilder III is now looking like it won't happen, perhaps ever, but at least not anytime soon. Fury wanted to fight this year, but Wilder wasn't ready, so talks of a December or January date broke down and resulted in a cancellation instead.

After their first fight in 2018 ended in a controversial draw, Fury dominated their rematch in February to win the WBC green and gold belt in seven one-sided rounds.

The trilogy bout was due to take place in December, but this week 32-year-old Fury said he has "moved on" from facing Wilder and will instead be "coming home" to fight instead, much to the delight of British fight fans.

Fury's promoter, Frank Warren, told talkSPORT the champion will now fight in London in December, against an unnamed opponent, setting up a mega-fight with fellow Brit Anthony Joshua in spring 2021.

Boxing fans are still left with so many unanswered questions. Firstly, where does this leave Wilder?

There were suggestions his rematch clause had expired, but over the weekend his manager Shelly Finkel said "it's simply not true" and maintained they still plan to take on Fury. However, it strangely feels like Wilder is not interested in the third fight having not been able to work out the puzzle that is Tyson Fury over two fights so far. Fans of 'The Gypsy King' would argue that Wilder has lost twice to Fury now - once on points, which was dubiously awarded as a draw, then in a total battering that ended in 'The Bronze Bomber's' corner rightfully throwing in the towel after blood was trickling from his ears.

Wilder has stayed out of the limelight since his loss to Fury, and his being uncharacteristically quiet suggests that he is not looking to build up a fight that he knows is not due to happen anytime soon.

So if not Wilder, then what level of opponent will we see Fury take on next? With many of the big boys of the division already in scheduled fights, fans are not necessarily expecting a top-level contender that could potentially jeopardise a mega-fight with AJ.

David Price's name has been mentioned but their potential match-up lost its interest many years ago when they were both still fighting at domestic level. Now, it's abundantly clear that the pair are on different levels and they have become quite friendly snce their old rivalry dried up.

As for Fury-Joshua, it will undoubtedly be the biggest British fight of all time. Joshua holds the WBO, WBA and IBF heavyweight titles; but will a clash with Fury be for all of the belts?

Ukraine's Oleksandr Usyk is the WBO mandatory and, should he beat Briton Dereck Chisora on October 31, will be pushing his claim for a world title shot against Joshua.

Londoner Joshua could relinquish the belt and not face Usyk, but that would mean Joshua vs Fury won't be for the undisputed title, which is what so many boxing enthusiasts really want to see.

Although, with a fight of that magnitude, does it really matter if all of the belts are not on the line? Fury doesn't think so.

Joshua still has to come through his fight with Kubrat Pulev, due to take place by the end of the year.

Announcements for Fury's next opponent is expected to be made very soon.