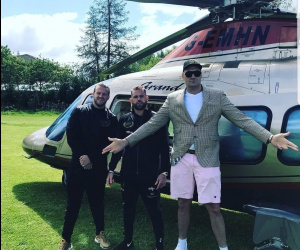 Tyson Fury is a natural showman

Showboating, explicit rants, WWE, dressing up as Batman, turning up to pressers in a yellow Ferrari or a helicopter... Fury just loves the limelight!

Tyson Fury has never been one to hide from the limelight. Throughout his career, the heavyweight boxer has caused plenty of drama, both in and out of the ring. Whether it’s press conference theatrics, showboating on the canvas, or sheer boxing class, Fury has made headlines for his unpredictable and impulsive behaviour.

It’s the thrill of the big occasion that seems to awaken this spark in Fury’s persona, and with another fight around the corner against Deontay Wilder, we’re sure to see some pre- and post-fight antics from the Gypsy King along with a hard-hitting, full-throttle performance in the ring. He is the favourite in Fury v Wilder odds to win the rematch and WBC heavyweight title, so let’s take a look at how Fury has risen to big occasions in the past.

Fury’s fight with Wladimir ‘Dr Steelhammer’ Klitschko in 2015 was one of the most anticipated fights in recent boxing history. The Gypsy King was at last presented with his opportunity to fulfil his dream of becoming heavyweight champion of the world. Klitschko had been the heavyweight king for over a decade, having not tasted defeat since 2004, but that all changed on a famous night in Düsseldorf.

Fury was in his typical quirky mood ahead of the fight. He caused a stir by arriving at a pre-fight press conference in a Lamborghini, dressed as Batman. Moments into the press conference, the Joker also turned up before a dramatic scuffle broke out between the two. It was a bizarre turn of events, but typical of Fury’s showmanship ahead of major fights.

He claimed that Klitschko had “about as much charisma as my underpants – zero, none.” As usual, Fury was able to back up his pre-fight boasting in the ring with a seismic performance against the Ukrainian. After 12 rounds, Fury won by a unanimous decision. In typical fashion, he celebrated by serenading his wife with a passionate rendition of Aerosmith’s I Don’t Want to Miss a Thing.

Much has been made of Fury’s absence from boxing following the win over Klitschko as he battled depression. But he managed to overcome his struggles and make a remarkable comeback, beating Sefer Seferi and Francesco Pianeta before a mouth-watering clash with undefeated WBC heavyweight champion Wilder was confirmed.

The fight was to take place just six months after Fury’s return, but there were no signs of nerves from the Gypsy King. He repeatedly referred to Wilder as a “dosser” in the build-up to the fight, a mantra he would repeat in between rounds

In the ring, Fury rose to the occasion in the most literal sense. After dominating most of the fight, he was sent to the floor in a dramatic 12th round by a devastating two-punch combo from Wilder. He looked to be out cold as the referee began the count, but when he reached five he miraculously opened his eyes, rose to his feet, and saw out the remainder of the fight. A split-decision draw was the final result, though many felt the Gypsy King had won.

Fury later described the final-round incident as “divine intervention.” It was the kind of moment that proved what a formidable fighter he is, and his ability to rise to the challenge no matter what.

The most recent example of Fury’s love for a big occasion saw him put boxing aside to take part in a WWE match against Braun Strowman. Fury attended WWE Smackdown’s 20th Anniversary where he confronted Strowman after being taunted by the wrestler earlier in the show. A few days later he appeared at WWE Raw where a mass brawl broke out.

A match was soon arranged between the two, which allowed Fury to indulge in showmanship once again. The match took place in Saudi Arabia, and for his walk-on Fury emerged dressed in traditional Arabian attire. He then demonstrated his wrestling talents by defeating Strowman in an event that further showcased Fury’s love of the limelight.

With his itch for professional wrestling scratched for the time being, Fury is focusing all his attention on the rematch with Wilder. The fight is pencilled in for February 2020, giving the Gypsy King plenty of time to plan his headline-making antics ahead of the bout.