Gary Cully wants to be a force at two weights

Irish hero Gary Cully has already won gold in his national lightweight division - and he wants to prove to everybody that he's also capable of big things at super-lightweight when he takes on Craig Woodruff on Wednesday's huge #MTKFightNight.

Unbeaten Cully (10-0, 5 KOs) takes on former Welsh champion Woodruff (10-5, 4 KOs) at Production Park Studios in Wakefield  – live in the US on ESPN+ in association with Top Rank, and worldwide on IFL TV.

Cully claimed the Irish lightweight title with a destructive one round knockout win over Joe Fitzpatrick during his last bout in February, and he now wants to display his elite skills in the division above when he faces Woodruff in a 140lb bout.

He said: "A win here can help keep me moving towards bigger fights and titles. This is a bout that can open a lot of doors for me and get me opportunities.

"I can make both 135lbs and 140lbs comfortably, and I want to show everybody that I am a force to be reckoned with at both weights. I feel really strong and powerful at 135lbs, and I'm confident my skills will show and I can carry that up to 140lbs.

"I'm really happy to be back on one of the first shows. It will be six months since I've fought so I'm excited to get back in there. I've been working really hard so I'm looking forward to putting all that hard work to use.

"My last fight was a big win. It was the first bout in my career with a lot of hype and excitement around it, so it was great to get that big fight experience and the fight week experience. It was a great learning curve and it will help me going forward when I step up to bigger things."

Cully vs. Woodruff is part of a huge bill on August 26, which also features Lewis Crocker and Louis Greene clashing for the WBO European welterweight title, plus British and Commonwealth bantamweight king Lee McGregor taking on Ryan Walker.

It’s part of a huge week of #MTKFightNight events, as on September 2, Akeem Ennis Brown and Philip Bowes clash for the British and Commonwealth super-lightweight titles, and Dan Azeez defends his English light-heavyweight crown against Andre Sterling.

Dillian Whyte dismisses any chance of a showdown with Daniel Dubois 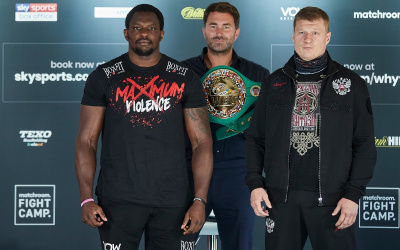