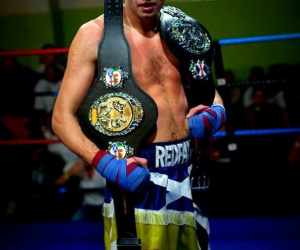 Welterweight southpaw Lee Redpath 1-0-0 from Edinburgh looks to double his win tally at the Fauldhouse Miners Welfare Club in Scotland on Friday 27th February in his second pro outing against 31-year-old opponent Paul O’Brien 0-2-0. BBN caught up with the 32-year-old Scottish southpaw ahead of this weekend’s fight to talk about his boxing background, his best friend flying the flag for UK boxing in the States, and plans for the future in the ring.

How did you first get into boxing? “First got into boxing when I was 11, my best friend Craig McEwan who’s signed to Golden Boy in America took me to the local boxing gym and he’s helped me a lot as a pro. I first started boxing at Culverstone Boxing Club. My first ever fight was at my high school gym hall when I was 11 and I fought a guy from Glenrothes Boxing Club in Fife.”

Talk us through your amateur background? “I had 35 amateur fights and I won about half of those.”

Who was your boxing hero growing up? “I liked Prince Naseem Hamed. I just liked the way he was; he was fast and also the cockiness and the confidence that he brought to the ring. He was an entertainer and that’s what I liked about him.”

You’ve turned pro very late aged 31, what was the reason behind that? “I’ve got my kids and didn’t have time to train around family life, but now that my kids are a bit older, I can commit to the training a lot more.”

Who was the biggest influence in that decision? “It was my family and my coach Scott as well. Everyone who watched me as an amateur and in the white collar shows always said I needed to do it on a bigger stage. My family and mum and dad were behind me so I decided to go for it to be able to say I tried, I didn’t want to look back in regret.”

Tell us about your team? “My coach is Scott Cowen, my old amateur coach is Robert McEwan – Craig’s dad. I still train in my old amateur gym Clovenstone ABC. Craig McEwan also helps me by passing on advice, the things that he knows about are just phenomenal.”

Your debut fight was September 21st in Cleland and you took all six rounds over journeyman Kristian Laight. Talk us through that fight and how you felt in the build up to it? “Obviously, I was nervous and I didn’t know what to expect. I knew Kristian Laight had been around for a while, I was quite nervous but once the bell went it was straight to business. For my first fight, I was just happy to get it out of the way and get the win, and definitely happy to get all six rounds.”

#What differences have you noticed in your own style and abilities from being an amateur to semi-pro to pro? “Well, I was taught as an amateur to move around the ring and hit and move, but as a pro you’re taught to plant your feet and get more behind the punch. I couldn’t really say that I felt the strength behind the punches more in my pro fight because I didn’t take too many to feel anything.”

How is the support that you receive in fights? “Support is great, all the support from my family and friends and the people that pay to come and watch me fight is great. In the white collar scene, I was selling 70 tickets each time. I had eight fights in the white collar and the fights never went past the first two rounds so pretty much everyone came to see me for the knock outs. It definitely helped in the pro’s to have built up that support, and it helped me to be able to get the hunger back for it, I was training like a pro for the eight fights that I had in the white collar circuit.”

Next fight is Friday 27th February in Fauldhouse against Paul O’Brien, what do you know of your opponent and how well have you prepared for this fight? “To be fair, I’ve only ever seen him in one fight against Josh McLaren and he got cut and stopped early on. I’m just going to work my jab and see what he’s got to offer. Both the same height, we’re both 5ft 11” and I know he also done the white collar stuff as well so we’re quite similar.”

What are your short-term plans for the next six months and your long-term plans for the next two years? “Just try and keep on it, my manager is saying he could possibly get me back out in April and then May or June could be looking at venues in Edinburgh. I want to keep busy inside the ring and out, and hopefully pick up the wins on the way. I’m here for the long run, so as long as I’m feeling fit and still enjoying it then I don’t see why I can’t just keep on going. My ultimate goal would be to win a Scottish or British title. Any sort of title and I’d be happy with that.”

Who is your favourite welterweight in the UK and in the world right now and who would you most like to fight one day? “Kell Brook is my favourite and I think the best welterweight in the UK right now. If I could fight anyone then it’d be Kell Brook, it’d be a hard fight. I’m a big fan of Pacquiao, my friend Craig used to train with him at the Wild Card Gym. I’m not really a fan of Mayweather, he's got fast hands and no doubt, he’s an impressive boxer but I like Manny because he’s an aggressor.”

Ben Day talks to fans ahead of first title challenge