Tributes have poured in for highly-talented professional boxer and top amateur Connor Law after he passed away, aged just 26

News broke late on June 3 that 26-year-old, unbeaten Kelty middleweight Connor Law (13-0) had passed away. While circumstances surrounding his death are not known at this time, Law had been suffering with depression and the number of tributes posted across social media is testament to the popularity of the three-time national amateur champion.

A winner of the famed Tammer tournament, Law was unbeaten in 13 outings as a pro but had not fought in a year.

Managed by Stevie McGuire Snr, Law recently posted on Twitter looking for sparring, later referring to a ’tough time’ he was going through and thanking friends for checking on him. He posted the following mesage on May 31: "Very grateful to have the mates I have, going through a tough time and they’ve reached out to check for me! Can’t thank them enough."

In his tragic, final post he congratulated Andy Ruiz Jr for his inspirational victory over Anthony Joshua on the weekend of June 1.

World champion Josh Taylor was devastated to hear the sad news, "Gutted to hear the terrible news about a good friend of mine & a great guy," he posted. "Rest in peace brother."

"He was a decent lad," added Leith Victoria coach Gary Young on Instagram. "I had the pleasure of meeting him many times. May he rest in peace and condolences to all his family and friends."

Super-middle Tommy Philbin posted a photo of him with Law, saying, "Heartbroken to hear the news about one of life’s real good guys."

Former pro boxer turned promoter, Kieran Farrell offered his hearfelt sentiments, "Just heard the news that Scottish Unbeaten Boxer only 25/26 years of age Connor law has passed away. So sad RIP champ, me and darryl Sharp both rate you as one of the best darryls fought, thoughts with Connors family & friends."

Lochend Boxing Club's Twitter account posted this: "We are utterly devastated to hear the sad news this evening. Connor Law a talented young gent who was respected by everyone inside and outside the ring. A pleasure to know. RIP Connor."

""This is terrible news," opined super-welter John Thain, speaking for many. "Such a sad loss, I can’t believe it. What a top boxer. Not only that, Connor Law was a true gentleman and a joy to train alongside."

Edinburgh coach Gary Young said, "Such a sad phone [call] received tonight from Billy to say that Connor Law has died, I know so many folk who were very tight with this lad, he was a decent lad." 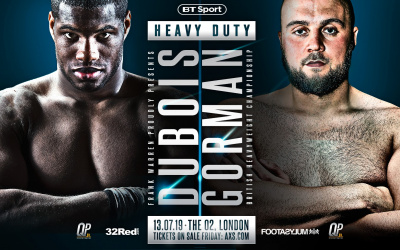 Nathan Gorman inspired by Andy Ruiz Jr: “You don’t have to be body beautiful to win a world title"