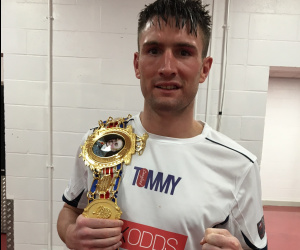 After seeing off Jack Arnfield (25-31), the mandatory challenger to his British middleweight belt, Birmingham’s Tommy Langford (20-1) has voiced his desire to challenge for European honours next.

He congratulated his stablemate and sparring partner Bradley Skeete via Twitter on landing a shot at the European welterweight title on March 24 and quipped, “Gotta be my next goal now as well.”

He added, “I know that the European title is being fought for this weekend between Alessandro Goddi and Kamil Szeremeta, so that’s a belt I would love to fight for next.”

The vacant EBU middleweight title in Langford’s sights will be contested this weekend between Italian Alessandro Goddi (33-2-1) and unbeaten Pole Kamil Szeremeta (16-0) in Roma.

Travelling fighter, Szeremeta, has not yet been involved in any championship contests, although the 28 from Bialystok does hold a win over a former EBU welterweight champion, Rafal Jackiewicz, who also challenged for the IBF World title in his career.

Goddi, the heavily tattooed ‘Highlander’ from Sardegna, gets the home advantage this Friday and has previously challenged for the EBU belt before, losing out to fellow countryman Emanuele Blandamura on a unanimous decision verdict.

He has since reeled off three straight wins in under three months, landing the WBA Continental title in the process.

The former Italian champion has also previously won the WBC International Silver middleweight title in June 2016, just a few days before Langford picked up his first title in the form of the WBO Inter-Continental strap with a fourth-round TKO win over Mexican Julio Cesar Avalos (16-4) in Belfast.

Goddi defended the belt successfully later that same year, but was unsuccessful when attempting to take Blandamura’s EBU belt in June 2017.

38-year-old Blandamura, who has previously been beaten by Langford’s stablemate Billy Joe Saunders in his career, recently vacated the European belt to challenge for the WBA World middleweight title this April in Yokohama against the reigning champion Ryan Murata (13-1) from Japan.

“I would happily take the fight with the WBA ‘regular’ champion, Ryota Murata,” claimed Langford. “Although, I want to be established this time, rather than jump up in levels again. My last opponent was ranked highly with the IBF and WBA governing bodies, so beating him means that I should jump up in their rankings.”

After moving up in levels to fight for the interim WBO World middleweight title last April with the plan to land a shot at stablemate Billy Joe Saunders’ WBO strap next, Langford suffered his first and only defeat in the pro ranks to New York-based Georgian Avtandil Khurtsidze (33-2-2).

The 38-year-old, known as the ‘Mini Mike Tyson’, caught the home fighter in their headlining fight at the Leicester Arena flush on the chin in the fifth round. The Hall Green ABC student bravely rose to his feet, but referee Phil Edwards waved the fight off.

In hindsight, he said, “I’ve not always been mentally disciplined enough to stick to instruction and I paid for my mistakes I made at world level. You can get away with it at domestic level, but I’ve learnt a lot from that fight and I now know what it takes to be an elite level fighter, mentally.”

It was the 28-year-old’s first defence of the Lonsdale belt that he won way back in November 2016 with a mixed decision over the now-retired Sam Sheedy.

The Bideford-born Birmingham resident got his tactics spot on to outwork and keep the no.1 challenger at bay.

He enthused, “I wanted to prove where I belong and there’s now only Martin Murray and Billy Joe Saunders above me in the middleweight rankings, and those two are both due to meet for the WBO World title in April. It’s a good start to 2018 and I plan for the rest of the year to carry on that way.

“I’ll be sitting down with my manager, Tom Chaney, and promoter, Frank Warren, to discuss what’s next for me, but the most important thing is to fight regularly and good things will come my way."

CJ Challenger: “I want to win titles to repay the people of Leicester for their support"