Tommy Langford reveals reason he moved up to super-middleweight

Former British and Commonwealth middleweight champion Tommy Langford (20-3) has made the move up to super-middleweight following back to back losses to local rival Jason Welborn in British championship contests.

On March 9 at the Walsall Town Hall, he makes his first appearance as a 168-pounder on a BCB Promotions event.

The 29-year-old revealed his reasons for making the move up a weight division after over six years and 23 fights competing at 160lbs.

"Everything in my training camp has gone well and I’m really excited to be making my super-middleweight debut, finally," the West Brom FC fan said. "I spar with super-middleweights like Callum Smith all the time, so I know what to expect and just want to put on a really good performance to announce my arrival at 168lbs.

"It’s been hard to make middleweight my entire career, if I’m honest, and I was always big at the weight. I just didn’t feel strong by the end of it. I look back at a few years ago and I had more power but, in the past 18 months, as weight-making has become more of a struggle, I felt like it wasn’t coming through because I was weight-sapped.

"When you’re a champion, you carry on going along with it because it’s still working; there’s the age-old adage of ‘If it’s not broke, don’t fix it’, but when that’s gone, you have to admit that it’s just too hard to do anymore.

"All I could do to get to the 160lbs limit was run like crazy, I put so many miles on the clock, but you can end up wasting away muscle and strength, which affects your performances in the ring."

Langford defeated his mandatory challenger Jack Arnfield via unanimous decision in February 2018 and then decided to allow local rival Welborn a shot, after calling him out on social media.

"I’ve always had a good engine, perhaps that’s what has got me through to the end of some fights – the first battle with Jason Welborn is a perfect example of that.

"I conceded my British middleweight title in that fight, but it was some consolation to me that it ended up as the BBBofC Contest of the Year 2018 and I now have a reputation for being in exciting fights and want to build upon that."

Langford was edged by a single point by Welborn in both fights. Devon-born Langford received a standing eight-count in the first fight, followed by two knockdowns in the rematch, live on Sky Sports. Despite the damage, he rallied back on both occasions but was denied the win by just a point on the scorecards.

"I feel better already at super-middle, which instantly tells me it was the right move, and I’m on the same team as Jason Welborn now I’ve joined up with BCB Promotions. It’s funny how boxing works out sometimes. The next two years are going to be massive for me and I think it’ll only be a win or two before I’m back in the mix, but I also suspect there will be one or two that’ll avoid me. I have already declared my intentions to become a two-weight British and Commonwealth titlist, but I don’t think most of the domestic titleholders would pick me as an opponent, but I’m fully prepared to work myself into a mandatory position, if I need to.

"The only way a good number of them can beat me is to knock me out, because they are not likely to outbox or outwork me. But, I’ve proved from the knockdowns in my last two fights that if I do go down, I get straight back up again.

"The first time I need to deliver is March 9 and I want to put on a really good performance to officially announce my arrival. After that, I’ll be bouncing back in a big way." 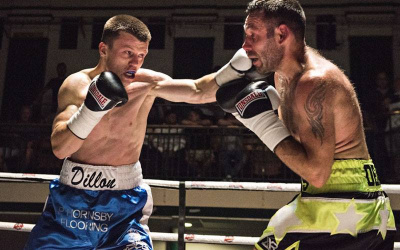 Liam Dillon ready to put on a show against Dave Birmingham