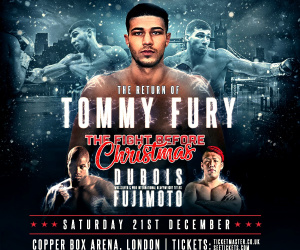 Tommy Fury is back

Light-heavyweight and Love Island star Tommy Fury (2-0) will make his much-anticipated return to the ring on December 21 at the Copper Box Arena, live on BT.

The unbeaten 20-year-old charmed the watching millions on the ITV2 hit show after entering the group and ultimately partnering up with his now girlfriend Molly-Mae Hague.

Fury placed his boxing career on pause to take part in the reality TV show, having clocked up two wins since turning professional in December 2018, marking the occasion with a win over Jevgenijs Andrejevs in his hometown of Manchester a year and one day away from his impending third fight.

He followed up his debut victory with a first round stoppage of Callum Ide in Leicester before swapping punching for TV and topping up his tan on the Spanish island of Majorca over an eight-week period.

Despite his growing celebrity status, Fury has always maintained that his priority will always remain the sport of boxing and he will take the next step in his career in London against an opponent to be confirmed shortly.

"I am delighted to welcome Tommy back into the fold on our huge end-of-year show at the Copper Box," said promoter Frank Warren.

"Tommy is a young man so taking a little bit of time out to pursue a television experience will have done him no harm at all and we always felt certain that he would be back in the ring sooner rather than later.

"In this day and age it is important for boxers to project their personalities to the public and Tommy is now one of the best known young fighters in the business.

"Now he has got to turn his mind back to what he does best and that is boxing. I am sure his new army of fans will be supporting him every step of the way."

Further details of Tommy Fury's return to the ring on December 21 will be revealed at a press conference on Monday, at which he will be in attendance along with main event attraction and Heavyweight star Daniel ‘Dynamite’ Dubois.

All the weights from Michael McKinson vs Luis Alberto Veron