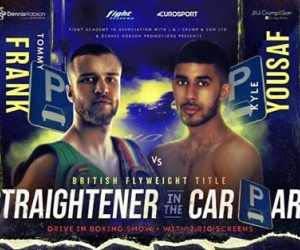 Despite their mutual respect, Tommy Frank and Kyle Yousaf are all set for a ‘Straightener in the Car Park’

Tommy Frank is promising to give a career-best performance on December 11 that will see him claim the British Flyweight Title, and bragging rights, over local rival Kyle Yousaf at Sheffield Arena, live on Eurosport.

In what will be the UK’s first ever drive-in boxing show, the ‘Steel City’ pair now go head-to-head on the ‘Straightener in the Car Park’ bill a few weeks later than planned, after the original show date was scuppered by the second national lockdown.

In what is a highly anticipated affair, ‘Super’ Tommy will put his 13-0 (3) record on the line against fellow undefeated Brit Yousaf, 16-0 (7), for the vacant Lonsdale Belt – and the 27-year-old says he cannot wait to show fight fans more of what he can do.

In a sport that is often criticised for one-sided matches, this is a genuine 50-50 contest that pits two of the UK’s best little men against each other.  Despite it being a ‘pick ‘em’ fight, Commonwealth Super Flyweight Champion Frank believes he is being overlooked, and says that motivates him even more in his quest for victory.

“At first, I was gutted that the original date was moved [from November 20], but Steve Crump and Dennis [Hobson] have worked hard and – like they always do – have come up with the goods and this new date.

“I know I’m in a real fight; Kyle is a quality operator.  I have nothing but respect for him, he’s never said anything bad about me, and I never badmouth other fighters anyway.  I only have good things to say about Kyle and his team, and I’m so excited.  I’ve got a bit of a feeling that I’m being underestimated, and I’m absolutely loving that.

“Something’s come over me that’s fuelling me more than ever, and I really like this feeling of being underestimated, of people maybe wanting me to win but thinking I might not.  It’s driving me on and I just know that I’m going to turn some heads with my performance, I really do.  I truly believe that the stars are aligned for me to get this title, and turn some heads while doing it.

“It brings the best out of me when people are doubting me, and when I’m up against it.  Kyle is a very live opponent and I’ve always said that the better opposition will bring the best out of me.  I’m in a really good place and going to pleasantly surprise some people on December 11.” 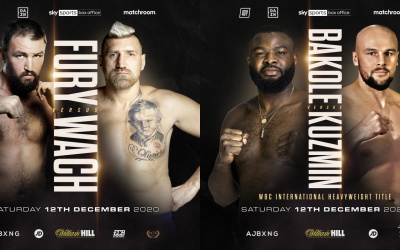