Tommy Coyle breaks down as he announces his retirement

The former Commonwealth lightweight champon annunced in an emotional interview with JOE, "It's a tough call but I've decided with my family, my trainers, managers that it's time to call it a day.

"But a phenomenal career. Have I achieved more than I thought I would? Yep. Have I, you know, exceeded my potential? Absolutely, you know, I never in my wildest dreams thought I'd end up fighting at Madison Square Garden, so I look over my shoulder and I'm content, I'm happy with my career.

Tommy Coyle: "This is the relaunch of me and I'll have that title around my waist"

Sean Dodd: People thought I was crap and easy to beat

"But it's time to call it a day. I always said I wanted to get out the game with all my faculties intact and I'm going to stick to my promise and that's what I'm going to do.

"The last six months, I'm not gonna lie, have been dark, they've been tough; they've been horrible because I don't want to retire, do you know what I mean? I love fighting, I love everything about it. I love the camp, I love being in camp with the lads. I love the pyhsicality of a, you know, getting in there and having it. I love it.

"But, listen, the way I fight and some of the wars I've been involved in... you go swimming, you get wet, you know, how many more wars can I have? Where do I draw the line? Do I have one more too many? And I just think, I have achieved my mountain top, I'm not a world champion, I'm not the best fighter in the world, but I've had a right good go, I've mad some top memories, and I've proper loved it, I really have.

"I don't want to fall out of love with the sport neither, I really love it. I have hundreds of kids training in the gyms, I want to stay in love with it, so I remain passionate about it and do a good job with all the kids that we work with.

"Listen if I'd have done this [announcement] before Christmas, I couldn't have done it, I genuinely couldn't. I've been in some holes over the last six months, bad holes, crying all the time because it is hard, honestly. It's been my best mate for 25 years this game, I just... it's over innit."

The well-loved boxer from Hull broke down in tears at this point of the interview as he drew the curtains on a fantastic career that lasted a decade from September 2009 to his last fight at MSG in New York against former world champion Chris Algieri in June 2019. Despite his protests, trainer Jamie Moore pulled him out of the fight at the end of round eight after a knock down in the fourth round and sustaining too much damage thereafter. Coyle was initially devastated, but later respected and agreed with his trainer's decision.

Matchroom Boxing posted these words on Twitter in homage: "All the best to Tommy Coyle, who has announced his retirement from the sport. Fireworks guaranteed when 'Boom Bom' gloved up. It's been some ride."

Matthew Hatton also paid his respects, "Congratulations Tommy Coyle on a tremendous career, what an entertaining fighter to watch, done absolutely fantastic. Can enjoy the sport on the safe side of the ropes now and sit back with pride! All the very best pal."

Close friend Carl Frampton, who sat alongside him during the interview to declare his decision, tweeted, "It was hard for me to do this. Tears and laughs with my good friend Tommy Coyle as he announces his retirement from the sport he loves."

Tommy Coyle put his own announcement up on Twitter, stating, "Sometimes you have to swallow your pride but in doing so be sure to have swallowed your blood first because if not then you will feel like a punk for the rest of your days #noregrets".

Demetrius Andrade insists he is not looking past Luke Keeler: "I’m going to give him the beating of his life" 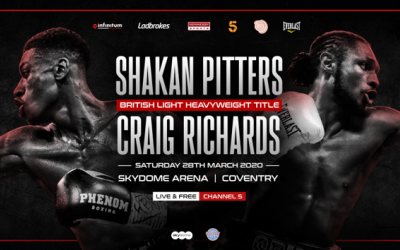