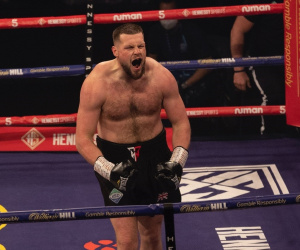 Iron-fisted heavyweight prospect Tommy Welch (3-0, 3KOs) had his first pro fight on foreign soil on Saturday, June 19 in Brussels, Belgium, and took his record to 3-0.

The 25-year-old hot talent from Brighton was handed a great opportunity to keep active and get another fight under his belt as he featured on the Maatala Production event in a scheduled four-rounder with Hungary’s Gyorgy Kutasi (4-14, 2KOs).

It took the heavyweight powerhouse from Brighton less than five minutes to despatch of the six-foot-tall Hungarian.

Welch has made quick work of his first two opponents, just last month he destroyed Dmitrij Kalinovskij in the opening round and prior to that on his pro debut in December he stopped Matt Gordon in the second round.

All-action Welch doesn’t intend to rack up the rounds and wants to wipe out Kutasi in quick time to show he means business on his rise up the heavyweight division.

He said, “I know what I’ve got in front of me and I don’t want to be going in there doing rounds.  At this early stage of my career it’s not about the rounds, that will come later as I step up, it’s about getting in there and unloading my punches and taking him out quickly, effectively and in devastating style.”