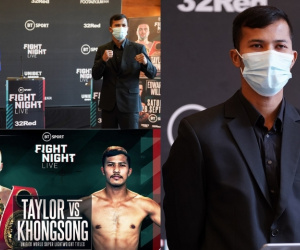 Who is Apinun Khongsong? Facts you need to know below

Having only ever fought in Thailand and Japan, not much is known about the Thai fighter, so BBN decided to dig up some interesting facts about him:

Born July 14, 1996 in Trang, Thailand, he is currently 24-years-old. His home city of Trang is southeast of the port town of Krabi in Southern Thailand, known as a gateway to the beautiful beaches, islands and limestone mountains of Trang Province.

His nickname is ‘Downua Ruawaiking’. Traditionally, many Thai fighters adopt a fighting name – Downua – coupled with the name of a sponsor – Rauwaiking, like many others in the Kiatkreerin stable. This is how most Thai’s get their unique names and why their surnames sometimes seem to change, with sponsors and gyms changing. Downua has reportedly had two notable sponsor names, originally ‘Sakkreerin’, like that of stablemate Fahlan Sakkreerin Jr, and now ‘Ruawaiking’.

Apinun experienced more than 100 amateur bouts, some of those were with the national team. Although it’s unclear what international bouts he had, he did state that he was in the national team from the age of 17.

Despite taking the less traditional, Western route into combat sports through boxing, it is reported that he did compete in some Muay Thai contests.

He counts Hall of Famer Khaosai Galaxy (47-1, 41KOs) as his boxing hero. The Bangkok superstar defended his WBA World super-flyweight title 19 times and retired as the champion in 1991.

He trains at the KiatKreerin Gym in the Samut Prakan suburb of Bangkok. He joined the 'Aspire to be a Champion' boxing program as an amateur, run by promoter Jimmy Ekkarat Chaichotchuang, and within just eight months, the natural talent was being groomed for stardom.

He made his professional debut in 2016, at the age of 19, fighting on a small card in Chiang Mai promoted by Jimmy Chaichotchuang, where he knocked out another debutant in the very first round.

He fought in his first 12 round bout just eight months after his debut, in February 2017, stopping Yuta Maruoka (12-5, 6KOs) in the opening round to claim the IBF Pan Pacific super-lightweight title, which he went on to defend successfully three times – all via TKO, never having to reach halfway through the trio of championship contests. He also won the IBF Asia super-lightweight title in his 10th contest in August 2017.

He has now fought in 16 contests against opponents with a combined record of 182-147-19, and is undefeated with 13 knockouts – which include three first-round, three second-round, and three third-round stoppages. 11 o fhis 16 fights have finished before the midway mark.

He is currently riding a six-fight stoppage streak, only completing 22 of a scheduled 58 rounds.

His best win to date was in his second to last fight in February this year when he became the first Thai boxer in 14 years to win an IBF World title eliminator at the Korakuen Hall, which is Japan's boxing version of Madison Square Garden, knocking out the iron-chinned Japanese champion Akihiro Kondo (32-9-1, 18KOs) with a killer uppercut midway through round five. This was incredible given that Tokyo’s Kondo had never been down, and had gone the distance with Sergey Lipinets (16-1, 12KOs) for the IBF World super-lightweight title.

When he won the IBF Pan Pacific title in February 2017 against Yuta Maruoka, the victory meant a great deal to the Kiatkreerin stable, with stablemate Komsan Polsan (40-12-1, 26KOs) having previously held the belt before losing it in Macau in 2015.

In total, the Bangkok boxer has only served 62 from 138 rounds, meaning he has completed only 45% of his scheduled rounds.

His world title fight with Josh Taylor on September 26 will be his first fight in another continent and only his third fight in a different country.

Khongsong and Taylor almost met in 2019 where the Thai boxer flew to Glasgow to serve as a stand-by opponent in the World Boxing Super Series semi-final should either Taylor or Ivan Baranchyk be forced to withdraw.

Marko Calic and Joshua Buatsi regularly crossed paths as amateurs: "I know him pretty well, so I will be well prepared"