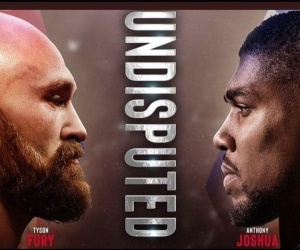 The Joshua-Fury fight is getting closer as dates are discussed

Published On Wednesday, May 5, 2021By British Boxing News
Related Tags: Joshua Vs Fury

According to English promoter Eddie Hearn, the Anthony Joshua-Tyson Fury World Heavyweight Unification Championship will take place in Saudi Arabia on July 24 or one of the following two weekends, while the Olympic Games start on July 23.

According to English promoter Eddie Hearn, the World Heavyweight Championship between Englishman Anthony Joshua, WBA-WBO-IBF holder, and Tyson Fury, WBC holder, will take place in Saudi Arabia on Saturday 24 July or on one of the two following weekends.

Joshua's coach, Englishman Robert McCracken, who also looks after the British Olympic boxing team and will be in Tokyo, will be faced with a huge dilemma. "An undisputed World Heavyweight Championship will be a bigger event than the Games."

All the very latest news on Tyson Fury vs Anthony Joshua

Boxing matches and the Olympic games, in general, are a great occasion for those that like to take their chances on sports betting. With a lot of websites doing promotions around these big events. Not everyone likes to take their chances this way but fear not: There are always ways to make a bit of cash online. For example with playing in online casino's and win a jackpot. You can find more on JazzySpins, the specialised website on how to have the best odds of success.

"While there are still a few details to be worked out in the contract between the two champions, the date and venue will be officially announced within a few days," Hearn said.

"An undisputed World Heavyweight Championship will be a bigger event than the Games. We have no choice about the date. We would be competing with any event. And, because of the time difference, it will be at night in Tokyo. Someone is paying a lot of money, so we have to do as they say."

The English promoter is referring to the Saudi Arabian organisers who will be funding the fight and have imposed this summer period. Hearn added that the World Championship will take place in a hall with 20,000 spectators.

Joshua has already fought in Saudi Arabia, Diriyah, on December 7, 2019, when he took his revenge on the Mexican-American Andy Ruiz Jr.