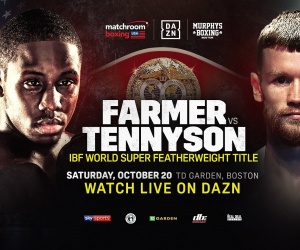 FARMER: BRING ME 'TANK' AFTER TENNYSON

Tevin Farmer is targeting a mega fight with Gervonta Davis – but knows he must be on his guard as he defends his IBF World Featherweight title against James Tennyson at the TD Garden in Boston on Saturday night, live on DAZN.

Gervonta Davis on Mario Barrios: "I’m going up two weight classes to face him. If they don’t give me the respect after this, I don’t know what I have to do"

Farmer (26-4-1 5KOs) makes the first defense of the crown he picked up in convincing fashion in August, flooring Australian Billy Dib in the ninth round of their clash in Sydney en-route to a landslide points win.

That win for the Philadelphia ace finally saw him reach the summit after a tumultuous journey to World title glory that saw a debut loss followed by further early career defeats, a shot hand and then receiving a rough decision in his first World title battle with Kenichi Ogawa in December, where his controversial split decision loss was then overturned to a no contest after the Japanese failed a drugs test.

Now the 28-year-old has a World title around his waist, ‘American Idol’ is in no mood to let it go. Tennyson (22-0 18KOs) has more than earned his crack at the champ, but Farmer wants a statement victory in Boston to lead to a showdown with ‘Tank’ Davis, and believes his new set-up with DiBella Entertainment, Matchroom Boxing USA and DAZN can deliver that blockbuster clash.

“It's beautiful to have this support and backing now from Lou, Eddie and DAZN,” said Farmer. “We can really talk our stuff now, I've got the big money behind me to make any fight. It feels so good to be told I am going to be busy. Three fights - I can't go four months without fighting, that's great.

“I have a big fight on Saturday and I'm not over-looking James. you don't get to this level for no reason and I know he's going to come to fight and try to beat me, but that's not going to be easy - he needs to make sure he
brings his A-game.

“I want to fight Gervonta Davis. I have a title, I have a great contract, so I don't need him - but I have to have that fight. There's been a lot of talking but I am about handling business. We've talked enough, I want the fight so let's make it happen.

“There's no more 'get a title' talk, there's millions of dollars in that fight and it can be made, it's one of the biggest fights in boxing. I don't have to chase anyone, I'm the money out there now, get your ticket and I'll pick it.

“The best want to fight the best and it's got to happen. I am a fighter, that's all I want, let's leave the streets on the streets and doing the fighting in the ring.”