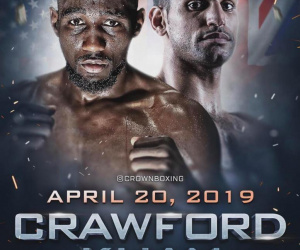 Amir Khan has signed a deal to fight WBO world champion Terence Crawford on April 20 at the iconic Madison Square Garden in New York, with the official announcement due to take place on January 15.

‘King’ Khan will net £4m for the World title fight but reportedly could have earned more against domestic rival Kell Brook.

The Bolton boxer hasn’t been a World champion for over seven years since losing the IBF and WBA super-lightweight belts to Lamont Peterson in Washington in December 2011, after previously unifying the titles five months prior in July with a fifth-round stoppage of ‘Super’ Zab Judah in Las Vegas.

Defending champion Crawford is one of the World’s leading pound for pound fighters, with the American's record standing at 34 wins from 34 fights with 25 knockouts and World titles collected at lightweight and light-welterweight, in which he made history when he held all four major belts.

Khan, 32, will fight in the US for the first time since his devastating knockout loss against boxing superstar Canelo Alvarez in May 2016. He has since rebuilt with back to back wins against little-known opponents and was forced to climb off the canvas to defeat his last opponent, Samuel Vargas.

Barry McGuigan commented on the fight, “Crawford is technically good as well as a devastating puncher. The better option for Khan at 147 pounds would have been Kell Brook.”

The undercard will also feature one of the standout boxing prospects of 2018 - Brooklyn-born Teofimo Lopez (11-0). The 21-year-old with nine KOs from 11 bouts, known as 'El Brooklyn', tackles former world title challenger Diego Magdaleno (31-2) in his next fight.