Luke Haigh gets off the mark

Harworth and Bircote's Luke Haigh (1-0) was triumphant on his pro bow with a four-round points win over journeyman Scott Hillman (0-31) on a Scott Calow and JE Promotions co-promotions event at the Harvey Haddon Sports Village in Nottingham on October 20.

The popular ticket seller cruised to a shutout points victory, scored at 40-36 by referee Shaun Messer, on the same night Ekow Essuman was crowned the new English welterweight champion in the main event.

The 37-year-old travelling opponent from Eastbourne was tough as nails and took a lot of punishment from the debutant with regular bursts upstairs and plenty of heavy right hands, which saw Hillman hurt in round-three but he held on and got through it.

The 26-year-old home fighter, trained by former Central Area champion Josh Morgan, worked behind jab well throughout his inauguration and decided to step it up in the fourth and final round after sensing his opponent was hurt in the previous round, but the durable Hillman, who has only been stopped in three of 30 contests, survived to hear the final bell.

Manager Joe Elfidh said of his super-middleweight charge, “I’m glad Luke got all the rounds in and came out unscathed, it was a cracking debut performance. He dominated the entire fight and looked good doing it.”

He continued, “Of the 40 plus fighters I manage, Luke is actually from the same village as me in worksop and we’ve known each other since kids. He actually lives at the bottom of my road and it’s a close village where everyone knows each other so he sold more tickets than the headlining English title fight did!

“I’ll be looking at getting Luke out again before the end of the year and we’ll be back at the Harvey Hadden next year in March.” 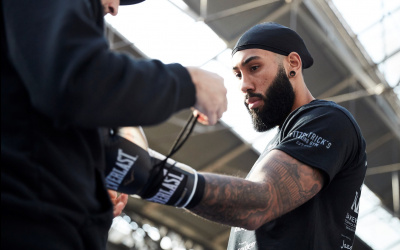