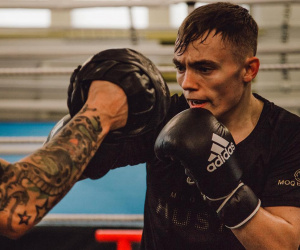 A lengthy verbal battle will end when the pair trade blows live on BoxNation – topping a card that includes world-ranked welterweight Michael McKinson against Sam McNess, the unbeaten Johnny Coyle and a host of promising debutants.

Farrag (19-3-KO5) presents a significant step up for Edwards (8-0-KO3) but the champion is relishing the prospect of exploring his own ability under a sterner examination.

Edwards said: “I’m just 22 and a lot of people respect me for taking a fight like this so early. I could build slowly but that doesn’t stimulate me mentally or physically. I don’t want it easy. If I had it easy, I’d fall out of love with the sport very quickly.

“I’ve stopped kids that a lot of fighters have been taken the distance by and there’s no buzz there. There’s no hair on the back of my neck standing up as I’m waiting to get in the ring. Fights like the Farrag one give me that. They’re the ones I want because those are the ones that will help me improve.

“If Farrag beats me, my level will be shown. What’s wrong with your level being shown? You get in the same fighter as you get out – everything else is just a mental image.

“The opportunity beyond it is my driving force rather than the actual defence of the title here.

“In the next 12 months, I want to push on. I’m looking at titles. I want that British title. I don’t want to be stagnant. It’s already hard for me to get opponents, though, and I see it getting harder once I put in a good performance against Farrag.

“This will boost my world rankings as he’s been world-ranked in the division above. I don’t think I’m ready for world title fights yet. I need a good two or three more years at least to mature, strengthen and grow in the professional game. I’ll take domestic level fights with both hands at this stage though.

“Despite being an eight-times London champion growing up, I never had the honour of fighting in York Hall so this will be the first time in over 50 fights I’ll have fought there. I’m really buzzing to be headlining it live on TV.

“Everything has fallen together. There are some really good fighters on the card – Johnny Coyle and the Michael McKinson vs. Sam McNess fight and there are five debutants including the Uzbek Olympians. It’s good that MTK Global is giving these fighters a UK platform because it’s one of the biggest fanbases.

“It’s a massive show with good fighters from top to bottom. It’s a top Friday night of boxing.”

Davey Oliver Joyce: Fighting at Madison Square Garden will get my name out there with the big boys!