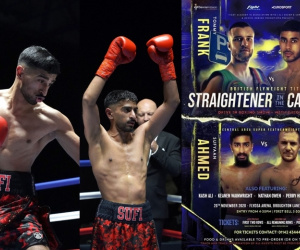 In a sport crying out for competitive matches, promoter Dennis Hobson has put together two genuine 50-50 title fights for the upcoming November 20, ‘Straightener in the Car Park’ event at Sheffield Arena – the UK’s first-ever drive-in boxing show – with both matches pitching local unbeaten fighters together.

The main event is the highly-anticipated dust-up between Sheffield fighters Tommy Frank and Kyle Yousaf for the British Title Flyweight Title. Whilst, not to be outdone, the chief support pits another ‘Steel City’ pair as rivals Kane Salvin and Sufyaan Ahmed go head-to-head for the Central Area Super Featherweight crown – with all the action broadcast live by Eurosport.

It really is hard to split Ahmed and Salvin. Both are 5-0 (0), both will be having their first ten-rounder, and it’s also the first experience of a title fight for the duo. Salvin is convinced his greater amateur experience will be key to victory come fight-night, but his supremely confident opponent says it’s his time and this is the first step onto bigger things.

Frank and Yousaf is also a bona-fide ‘pick em’ contest. Yousaf is 16-0 (7), while Frank’s ledger stands at 13-0 (3), and the pair are both aged 27. The fight for the coveted Lonsdale Belt has garnered huge interest amongst pundits and fans, while the history-making drive-in element of the promotion has sparked the imagination on many in the boxing industry.

“To appear on the UK’s first ever drive-in boxing show means everything,” said sufyaan. “I can’t thank Dennis, Steve Crump and John Fewkes enough for the opportunity to appear on such a historic event. The main event is cracking too, between two undefeated Sheffield lads, and I’m looking forward to watching that one! There’s also great TV exposure with Eurosport covering the show, so it’s just a dream come true.

“Kane is right when he says he has had more amateur fights than me. He does have more experience than me, but come fight-night it’ll be the first time either of us have done 10 rounds. I’ll take him into deep waters, and me and my team are very confident that we’ll get the victory.

“I have a lot of respect for him, he’s a nice kid, we get on and have boxed on the same shows. I have nothing bad to say about him and he’s a good fighter, he’s got a good engine and is a good counter-puncher. But I’m just excited to be in a 10-round fight, I’ve put everything into this training camp and I want this more than ever.

“It’s also most definitely a TV-friendly fight, and it could be hard to choose between our fight and the main event in terms of which will be the ‘fight of the night’. Our fight will be a 10-round war. I’m treating this as more than a Central Area fight, I’m treating it like it’s my world title. There are some good fighters that have held this title, and it’s a great first rung on the ladder to bigger things.

“With regards to the main event, I know both fighters well, I speak to Tommy and I’ve spoken to Kyle. On paper it’s a 50-50. Kyle is very tall for the weight, and Tommy has been sitting down on his punches in his last couple of fights. I’m favouring Tommy, and I think it might be a late stoppage, maybe around nine or ten. No disrespect to Kyle, it’s just that Tommy has done the 12 rounds a couple of times, and I think that will be a factor. Tommy has been in a war before and come through, but Kyle hasn’t been in that position. I think Tommy will drag him into deep waters and stop him late.”