Steven ‘The Quiet Man’ Ward is forecasting a raucous atmosphere when he clashes with former sparring partner Liam Conroy for the WBO European light-heavyweight crown.

With a growing local following, Ward will revel in hometown advantage.

Ward said: “I think Belfast is one of, if not the best place to fight. I love being from Belfast having the crowd support me when I fight there, making all kinds of noise.

“A ring is a ring but being at home is more comfortable because I can see the kids the day before the fight and it just makes everything seem more normal.

“The atmosphere in there will be electric. I get goosebumps just thinking about it. It was great last time but I can only imagine what this one is going to be like.

“Neither of us are big talkers so I doubt there’ll be any disrespect in the build-up to this one. We’re both happy in what we’re doing.”

Ward has fought at home in nine of his 11 fights but was most recently in action at York Hall back in April when he halted Abdula Arabie inside five rounds.

Joining the light-heavyweight title fight on the bill is a WBC International super-lightweight clash between Tyrone McKenna and Darragh Foley, an intriguing clash between Paddy Gallagher and Liam Wells plus a packed undercard. 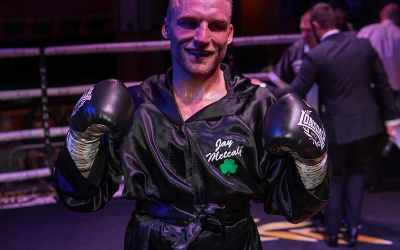