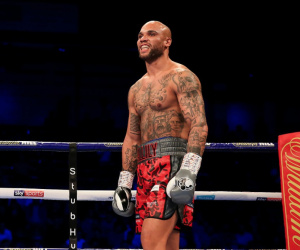 Simon Vallily on Thor Bjornsson: “He’ll be taking some big bombs, that’s for sure”

Simon Vallily is promising fans that they will see him and Thor Bjornsson going in to take each other’s head off when they clash in this week’s highly-anticipated exhibition bout.

The two men will collide at the Conrad Dubai on Friday, with the event being broadcast live around the world on Coresports.World.

Tickets for the event are also available, with a VIP Brunch package consisting of food, unlimited drinks for three hours and ringside VIP seating, priced at 1000 AED, A standard ticket to the event is priced at 350 AED, which includes one drink, with an upgrade drinks package also available.

It will be Thor’s latest exhibition bout ahead of his highly-anticipated showdown with strongman rival Eddie Hall later this year, but Vallily insists he is going to throw a spanner in the works and land some big bombs on his opponent.

Vallily said: “It should be interesting. As far as I’m aware, we’re both just going in there to try and take each other’s head off.

“He’ll be taking some big bombs, that’s for sure. I’m excited to be out in Dubai for a week and it’s going to be some nice sun, some nice food, and a nice tear-up.

“I watched Thor against Steven Ward and he’s a big strong guy, but I’m going in there for the knockout. MTK Global contacted me and asked me if I wanted it, and I jumped at the chance, so I can’t wait.”

How to watch Simon Vallily vs Hafthor Bjornsson