Round up of British boxing results on Easter weekend

BBN list all the British boxing results from the Easter weekend

Below is the complete list of results from British boxing shows and boxers on April 19 and 20.

James Dickens (26-3) returned to his home city with a bang by knocking out Nasibu Ramadhan (27-14-2) with a left to the head just 28 seconds into the fifth round of their scheduled 10-round featherweight contest.

Alex Dickinson defeated Dorian Darch when he retired with an injured shoulder in round two.

James Metcalf KO'd Santos Medrano in the eighth and final round.

Fan favourite David Allen (17-4-2) justified his headlining status at The O2 on April 20 by really siezing his moment in the limelight by halting former world heavyweight champion Lucas Browne (28-2) in three rounds with a perfectly timed body shot.

On the undercard, unbeaten Josh Kelly widely outpointed Przemyslaw Runowski with scores of 100-88, 100-88, 100-89, after dropping the Polish welterweight three times to defend his WBA International belt, once in the second and twice in the final two rounds, however Runowski valiantly held on and heard the final bell.

The 'Welsh Wizard' Joe Cordina knocked out Andy Townend in sixth round to win the British lightweight title by pummeling him to the canvas three times in the sixth round, causing the referee to stop the contest.

Pawel August (9-0) headlined 'The Battle in the Bay' Torquay event in an International contest against Robert Halas (11-20) of Serbia, winning via second-round KO.

Local boys Adam Bannister (1-8), Nathan Halton (3-3-1) and Shane Medlen (2-1) all won in their Torquay debuts having had to travel throughout the UK in their previous professional contests.

Darren Townley (8-3) of Plymouth was the shock of the night when he was KO'd by Naheem Chaudhry (2-43) in the first-round.

The curse of the fledgling pros hit both Aaron Gribben (1-1) and Humzah Awan (1-1), who were each looking to build on their debuts with a second win, but both lost on points from the home corner instead.

Amir Khan's (33-5) WBO world welterweight title fight with Terence Crawford (35-0) ended in bizarre fashion when he was pulled out by his corner following a low blow in the sixth round, citing that he was in too much pain to continue. 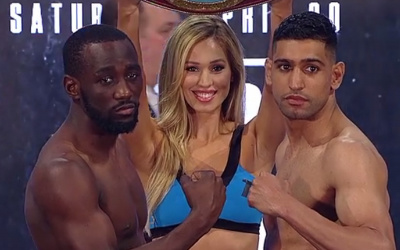